Quartet of friends make music together 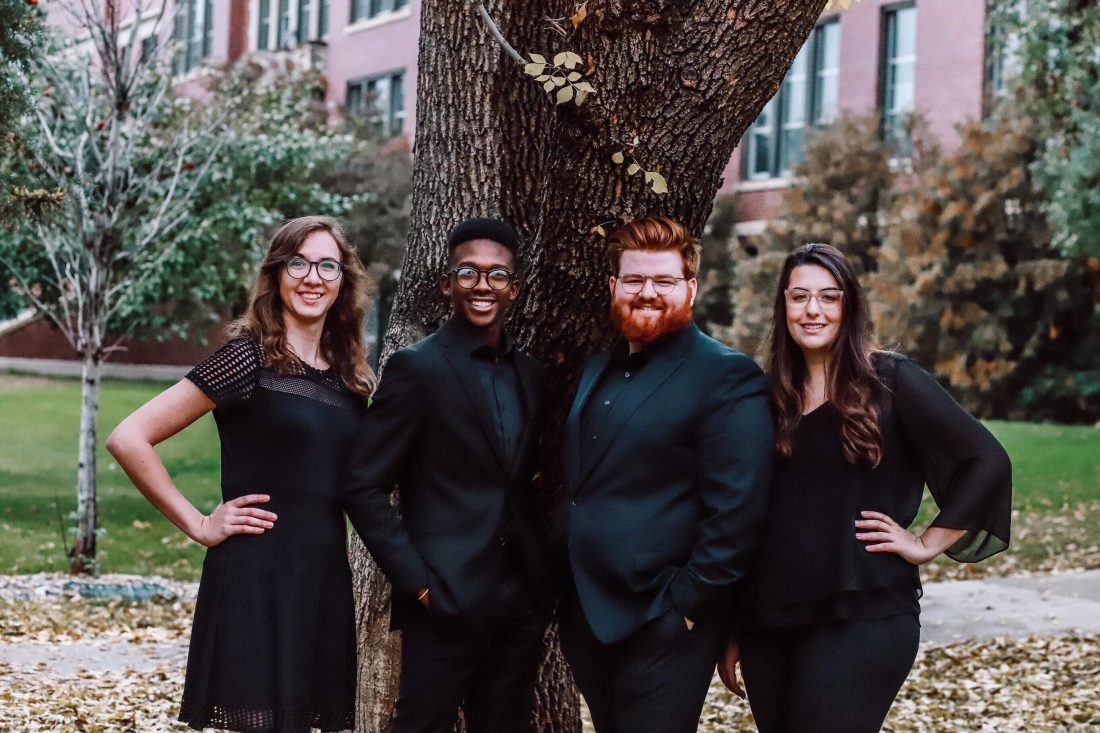 They make beautiful music together.

“We all go to school together at Minot State and we’ve known each other for a long time,” said Wallace. “Actually, we all knew of each other in high school.”

“It wasn’t until two years ago that we were singing and we realized we can fulfill a certain voice part,” said Wallace. Wallace sings bass, Bowles, tenor, Capp, alto, and Sem, soprano.” We started singing some of our choir repertoire and then we started singing hymns,” Wallace said.

They noticed they had a really unified sound. “From there we just decided we should do more of this. It helps that we’re all really good friends and it’s easy to make music with your friends. That’s where it started off,” Wallace said. 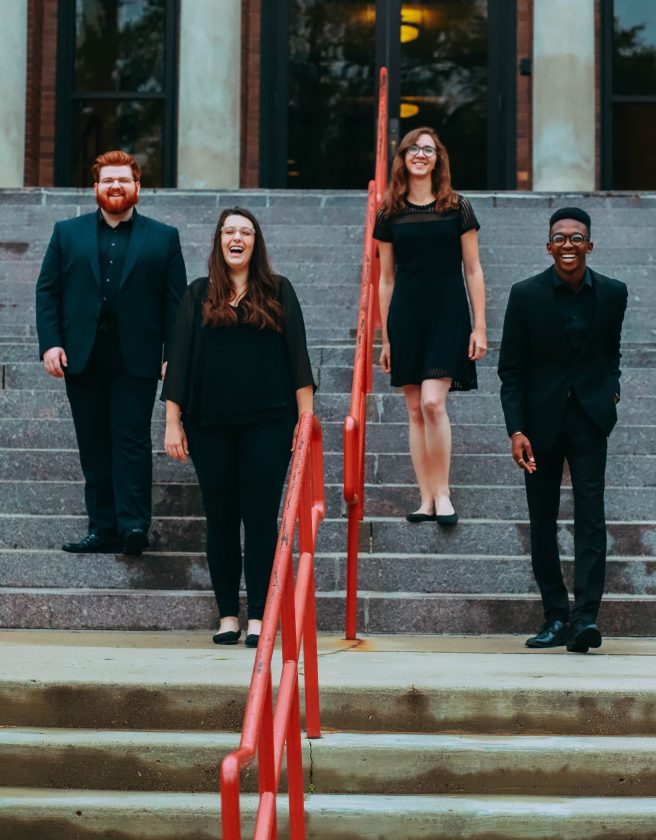 The name of the group came from Bowles who noted the “vox humana” setting on a Yamaha keyboard. “It’s an organ stop traditionally and it’s supposed to sound like the human voice,” he said.

Bowles said the group performs many hymns from various hymn books and also choral repertoire. “We kind of stick to the classical end of the a capella group format,” he said.

They also have a couple pop arrangements for voice – “Dancing Queen” and “Just the Way You Look Tonight” that they sometimes sing.

“We like to dip our toes in the jazz world,” Bowles said. But they can do almost any type of music. “As long as it has four parts,” he said.

The group first started performing at performance labs at MSU. “Then we started tagging on to choir concerts and getting our name out there,” said Capp.

She said they decided to go out into the community to perform, singing at churches and fundraisers. They have performed at a number of special events or occasions in Minot and the area, including with the Minot Symphony Orchestra for its 2018 Christmas concert.

What’s next for the quartet?

Wallace, of Minot and a senior at MSU, will graduate with a degree in music education. He’s president of the National Association For Music Education on campus and has served on the Music Student Advisory Council among his music organizations. He plays trombone in the MSU Concert Band. He plans to teach music.

Bowles, of Minot and a senior at MSU, will be student teaching choir at Minot High School in the fall. He’s a former member of NAFME. He performed with the Minot Symphony Orchestra in March as the winner of the orchestra’s annual MSU Senior Honors Concerto Competition. After graduating he hopes to go on to graduate school, focusing on conducting or performance.

Capp, of Max, is a senior in music education. She’s publicist for NAFME and is on the Music Student Advisory Council. She and Wallace are student directors with the Western Plains Children’s Choir. She plays trumpet in concert band and jazz band. Her goal is to teach music.

Sem, of Minot, a junior at MSU, will graduate next year with degrees in music and accounting. She is treasurer of NAFME and also served on the Music Student Advisory Council. She plays saxophone in MSU Concert Band and jazz band. She plans to become a certified public accountant.

Last semester all four of them played in the MSU Jazz Band. All of the quartet members also have had roles with the Western Plains Opera Company.

In May, members of the quartet who also are members of the MSU Concert Choir are going on a concert tour in Norway, including a stop in Skien, Minot’s sister city, for Norwegian Independence Day on May 17. In case an opportunity arises for them to sing as a quartet, they have prepared a few pieces relating to the Norwegian culture.

After they return, the quartet plans to sing at a number of events during the next months.

All of the friends agree they enjoy singing together.

For more about the Vox Humana Quartet including videos of performances visit their Facebook page.

Shyanne Belzer/MDN The PATH office in Minot is located on North Hill. All visitors are greeted with a smile from employees up front who are ready to assist them however they can. The office is cozy and information on PATH and all it does is readily available.

Alex Eisen/MDN Assiniboine’s Simone Turner-Cummer (14) clears the puck from the crease Sunday in the national championship game. Turner-Cummer was named the Tournament MVP and scored the championship-winning goal in the first period.

Alex Eisen/MDN The puck squirts free as Minot State and Assiniboine players get tangled up during the third period of the ACHA Division II women’s national championship game in Frisco, Texas.