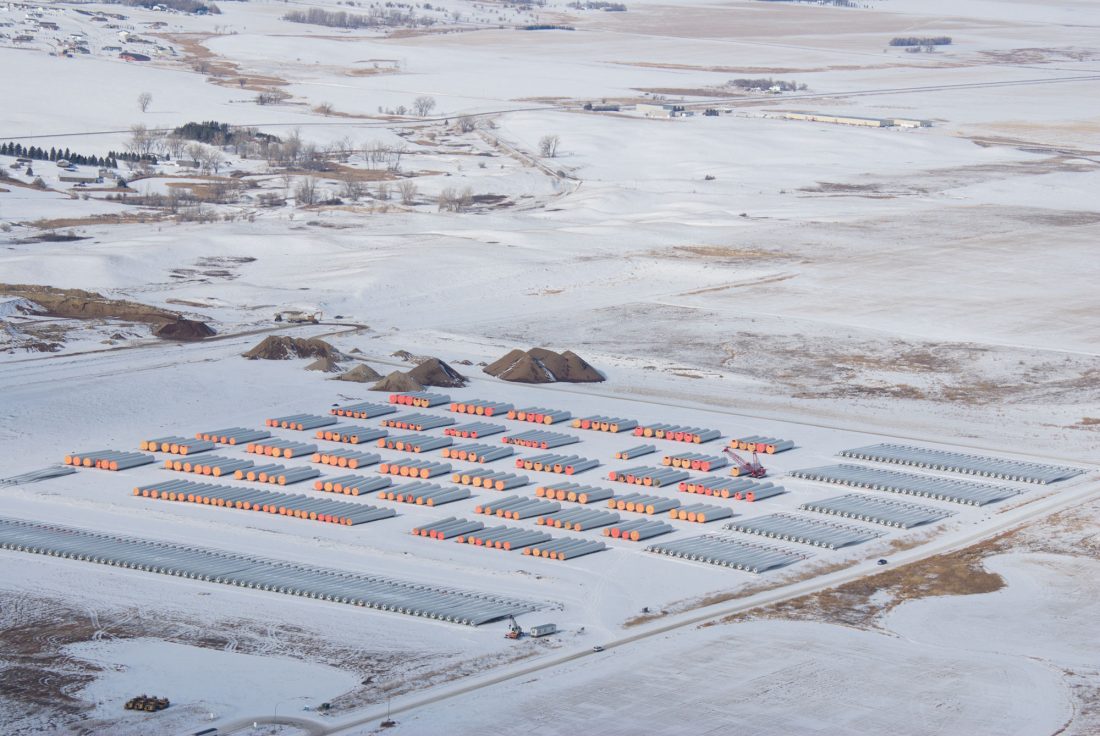 Submitted Photo The staging and deployment area at Watco Supply Chain Services is shown in this aerial photo.

The company entered into an agreement with MADC in late 2018 to lease 76 acres of land at the industrial park in northeast Minot for two years. Watco Supply Chain Services is using the land as a staging and deployment location for a future wind turbine development.

Wind turbine components arrived via truck and rail, were offloaded, and placed on bunks on the ground. The 680 total components, including tower sections, hubs, and blades, will remain on the structures until they’re assigned to the 89-unit wind farm.

This contract is a direct result of the Industrial Park of Minot earning Burlington Northern Santa Fe Railway’s stamp of approval as a Certified Site in the fall of 2017.

“The decision to pursue site certification wasn’t an easy sell. Time and resources had to be diverted to complete the intensive screening process,” said MADC President and CEO Stephanie Hoffart. “Our contract with Watco Supply Chain Services is a strong representation of the ROI realized from being vetted by BSNF Railway.”

“The purpose of BNSF’s Certified Sites, like the one in Minot, is to give communities a jump start on development opportunities, “ said Colby Tanner, AVP Economic Development, BNSF Railway. “MADC’s work to gain this certification with BNSF opened the door for more economic growth in Minot and we’re pleased to be a part of that.”

BNSF Railway currently has 18 sites in its select inventory; the Industrial Park of Minot is the only Certified Site in North Dakota.

“It is Watco’s obligation to devise and implement solid business solutions for our customers. A key element in this process is to locate and build strong relationships with great partners such as MADC and the entire Minot community,” he said. West indicated there is potential for expansion in the local market.

“We would also like to thank MADC, current MADC tenants, and local businesses for the partnerships and hospitality. We hope to grow our wind energy footprint in the Minot area,” he said.