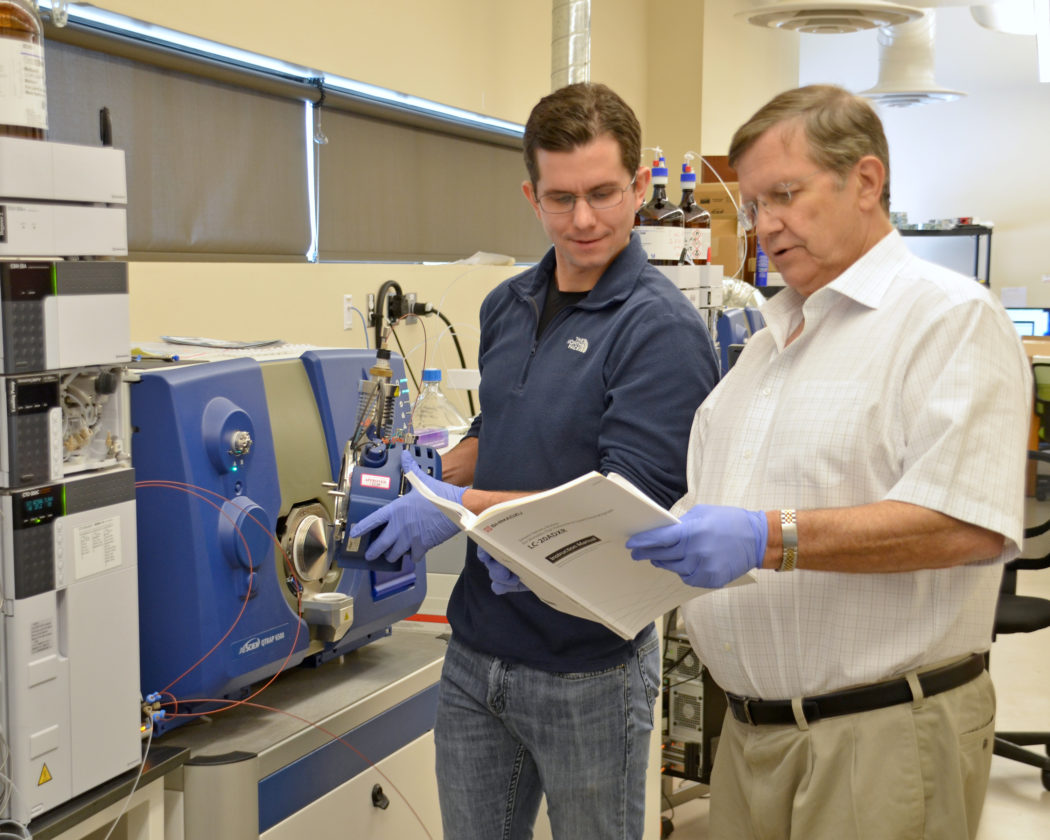 Submitted Photo Robert Howard, president of MedScan, right, and his son, Bill Howard, chief operations officer, make adjustments to a Liquid Chromatograph Machine in one of the many labs in their business in Williston in this photo by Roger Riveland.

The president and chief executive officer of the family-run MedScan Laboratory and Advanced Drug Testing, Howard said he finds himself in a position he never would have dreamed when he left for college in Chicago after graduating from Minot High School in 1970.

“You make plans, but basically, what you do is you react to your circumstances,” he said of the direction life has taken for him. “Besides, 25 years ago who would have thought that the nation would be caught in an opioid epidemic?”

Opioid testing has been the latest in-demand drug testing service across the country. MedScan, a full-service testing company, was well positioned to respond.

Howard invested into equipment that took the company’s services to a new level. To find similar services, a person would have to look to Seattle or Minneapolis.

“We bought the finest analytical instruments that money could buy – basically research-grade equipment – and applied it to the growing problem at that time of opioid addiction,” Howard said. “We had a technological advantage on our competitors in that we could detect it at very, very low levels.”

Whereas, typical laboratory equipment can detect opioids in a person’s system after two or three days, MedScan is capable of detecting it five to seven days after a person’s use.

The arrival of the Bakken oil boom several years ago had created a dilemma in hiring for some positions because of competition with the oil industry for a limited pool of workers. Howard responded by opening an operation in Georgia that currently employs 20 to 22 people in providing data entry and other backup support for the laboratory.

“We took advantage of the fact that with broadband internet capability, we could have remote operations,” Howard said.

In addition to the sister company in Houston, collection/phlebotomy sites exist in 20 states, bringing total employment in the overall operation to about 82 employees. MedScan funds continuing education for employees who want to advance their skills in the business.

He owned and operated a laboratory in Houston before returning to North Dakota in 1992 to take part in a business startup in Williston. When that venture ended for him in 1996, he began working with a group of attorneys as an expert witness and started MedScan.

In 2001, he launched Advanced Drug Testing in Bismarck to serve as a third-party administrator for drug testing programs. After a Chicago company enticed away his employees in 2003, his daughter took the helm and they moved the company to Williston. Advanced Drug Testing administers drug testing for about 6,000 companies nationwide, ensuring results of testing are consistent with prescription information and federal and state laws.

Drug testing is used by a variety of clients, from the transportation industry to physicians who need to ensure patients are taking medications as prescribed.

Howard said he has been able to invest and grow the company because of the involvement of his sons and daughter. Bill Howard, who has a degree in chemical engineering, left 3M in 2012 to become chief operations officer at MedScan. Jesse Howard, who has a doctorate in computational chemistry, works with the company’s specialized lab in Houston. Michael Howard is the optimization expert who has played a key role in building the business. Daughter Jennifer Heller continues to manage Advanced Drug Testing.

Howard said his children grew up listening to dinner discussions about science. His wife has a master’s degree in chemistry.

“So they all levitated in that way,” said Howard, who considers himself lucky that they did. “I would not have undertaken this kind of thing had I not had that kind of backup support.”

With a workbox full of enough projects to keep two technology professionals busy, MedScan continues to take a lead in the industry with internally developed software. The company also makes its own tools using 3D printing.

MedScan’s Laboratory Information Management System serves as the spoke of its information wheel, where the results of various instrument tests are collected and categorized. For instance, tests can identify as many as 70 targets in a single urine sample, creating a wealth of data. Howard described the information management system as an ocean of data reduced to a pond, which certified scientists scrutinize before a conclusion goes to the client.

Howard sees more growth in the future for the business.

“We are still expanding,” Howard said. “For a while, we stopped taking new customers in Williston because we were topped out, but we have been able to share some of that testing responsibility with Houston, so we are still going.”