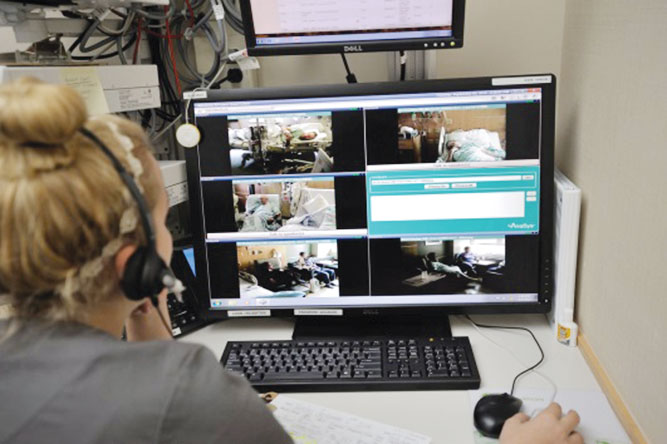 Submitted Photo A video system to check on patients at risk of falls is now in use at Trinity Hospital.

A video system that can monitor patients at risk of falling is having a positive impact on patient safety at Trinity Hospital, according to a press release from Trinity.

To help prevent patient falls and injuries, the hospital installed a new technology, the AvaSys TeleSitter system, in June of last year to provide nursing staff the ability to monitor and converse remotely with patients who are at high risk of falls or other safety monitoring needs. Nearly 1 million hospitalized patients in the U.S. experience a fall each year, according to the U.S. Department of Health and Human Services.

Danaka Walz, director of Clinical Excellence and Patient Safety, said in the press release that data from the first year of usage at Trinity Hospital show that the TeleSitter system has been a key factor in achieving 97 fewer patient falls – a reduction of 46 percent.

“These results are encouraging and we look forward to continued improvements in the future,” Walz said in the press release. “Patient falls are among the highest safety concerns for any hospital. This new system underscores our commitment to patient safety and gives us an added measure of protection for patients by giving staff the ability to intervene immediately if a patient is at risk of harm.”

Each patient admitted to Trinity Hospital receives an assessment, and those considered to be at risk for falls are provided with a number of safety measures, including gripper slippers, bed alarms, and, in some cases, placing a staff member in the patient’s room as a sitter. TeleSitter doesn’t replace these protections but enables the hospital to utilize staff resources more effectively. The decision to use a TeleSitter for any given patient is made by the Unit Charge Nurse and a trained staff member, called a TeleSitter Tech.

Jodi Wiersch, Surgical Unit Assistant Manager, has tracked the hospital’s TeleSitter usage and notes that utilization has steadily climbed, according to the press release. “Initially 34 percent of the units were in use, now it’s up to 84 percent, which indicates nursing staff view this as an important tool in cases where they’d like to have an extra set of eyes on their patient.”

Trinity Hospital began its TeleSitter program with 13 units. It now has 16 thanks to funding from the Trinity Health Foundation. Each unit consists of a portable cart with two-way audio and a camera that pans, tilts, and zooms to monitor an entire patient room. The TeleSitter Tech observes multiple patients from a central station and can intervene by using the two-way audio to speak with the patient in the room.

For example, if a patient is attempting to get out of bed, the monitor tech can ask the patient to wait for assistance or sound an alarm for immediate staff attention. “Our response time averages 15.1 seconds,” Wiersch noted.

Walz emphasizes that the cameras don’t record any images and each is equipped with a virtual curtain that can be activated to protect patient privacy.

So far, the system has been useful in monitoring patients with delirium, seizures, and confusion; and it’s also been helpful in maintaining the safety of lines and tubes. But most of the patients being monitored are at risk of falling.

Medical Unit Assistant Manager Jessica Kornkven, who chairs the Falls Committee, says response among families has been positive. “It’s hugely popular,” she said in the press release. “In some cases, families of at-risk patients have felt the need to be with their loved one almost all the time. This gives them a little more freedom and peace of mind. They can step out and know that their loved one is safe in the hospital.”