Whale of a Muskie 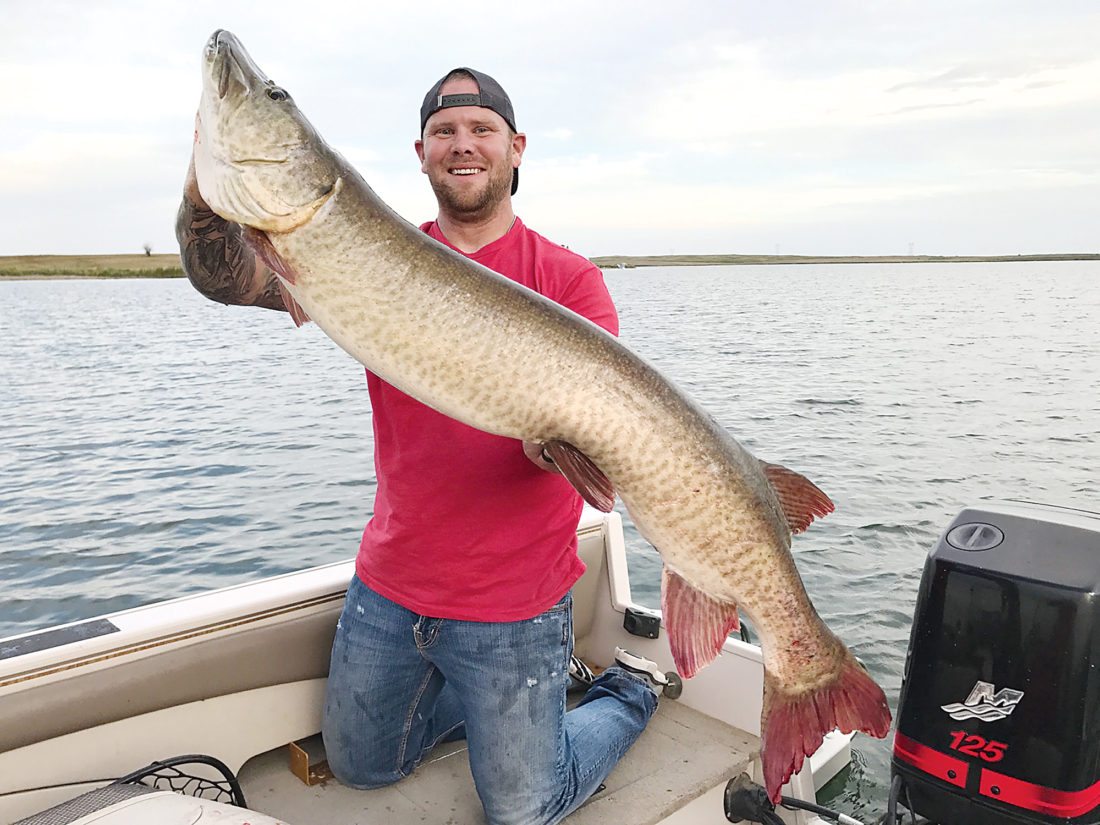 WILTON – This is not a story of the “one that got away.” Not this time. This is about the fish of a lifetime. A monster. A beast. Unbelievable but true!

This past Thursday evening Joshua Kelly, Minot, landed one of the largest pure muskellunge ever recorded in this state. He and fellow fisherman Kellen Latendresse, Minot, had just begun an evening of fishing on New Johns Lake when Kelly hooked into the massive fish.

Latendresse, an experienced muskie fisherman, said the battle on hook and line was one of the most intense he’s ever seen and that there were moments when the outcome was in doubt. However, Kelly was able to bring the beast to the boat where Latendresse was waiting with a large landing net. What followed was what Latendresse described as the “hardest high five ever.”

The two men quickly measured the fish on a long measuring board designed for that purpose. They were stunned when the tail of the huge muskie reached the 53 inch mark. The girth was measured with a cloth tape at 22 inches. They knew the proportions put the muskie in elite company.

True to the muskie fisherman’s code, Kelly released the beast back into the water. No weight was ever taken. No scale ever used. The important thing to the two fishermen was to make certain the

massive muskie was released unharmed. As the fish swam away and the tail disappeared into the deep, the two men just stared at each other – speechless.

A few minutes later, despite having plenty of fishing time remaining, they headed back to the boat ramp. There was simply no point to fishing any more that evening. Besides, all they could think about was the size of Kelly’s fish. Concentrating on fishing just wasn’t going to happen.

Was it the largest muskie ever caught in North Dakota? Perhaps.

Cory Bosch of Mandan holds the state record for pure muskellunge with an astonishing 54 inch fish caught at New Johns in 2007. Bosch’s fish tipped the scale at 46 pounds, 8 ounces.

Since Kelly’s fish was measured but never weighed, the only way to ascertain the weight of the muskie is to refer to charts that estimate a fish’s weight based on length and girth measurements. Unfortunately, for many species of fish, muskies included, such charts are all over the board when it comes to estimating weight. Using several length/girth charts on Kelly’s fish show estimates ranging from under 30 pounds to more than 50.

Latendresse thought the fish was 40 pounds plus, maybe mid-40’s. If so, that would put it very close to Bosch’s state record. The second-largest muskie ever verified by the North Dakota Game and Fish Department was a 46 pounder caught by Bill Wald of Washburn in 2003, also out of New Johns. Wald’s fish measured the same as Kelly’s, 53 inches.

Records aside, Kelly’s fish ranks as one of the top three muskies ever caught and verified in North Dakota. Muskies over 50 inches are a very rare fish. In fact, outside of Bosch, Wald and Kelly, there’s been only two other pure muskie registered with Game and Fish in the 50 inch-plus category. Ronald Lee, Bismarck, landed a 51 inch muskie from New Johns in 2010. Lee’s fish weighed 31 pounds, 4 ounces. Doug Verdouw, Bismarck, registered a catch-and-release 51 inch muskie from New Johns in 2015.

BISMARCK – In response to public efforts to prevent the spread of coronavirus to vulnerable individuals, the ...

North Dakota’s congressional delegation and staff have not been tested for COVID-19, according to their offices. ...

Tribally owned casinos across North Dakota have temporarily closed to protect their employees and visitors against ...

The U.S. Census Bureau has suspended field operations until April 1 as it continues to carefully monitor the ...

Governor asks state not to become complacent about virus spread

North Dakotan’s who want a chance to hunt elk, moose and bighorn sheep in 2020 are reminded the deadline for ...

What you need to know today about the virus outbreak

Brady to Tampa only tip of NFL’s changing landscape