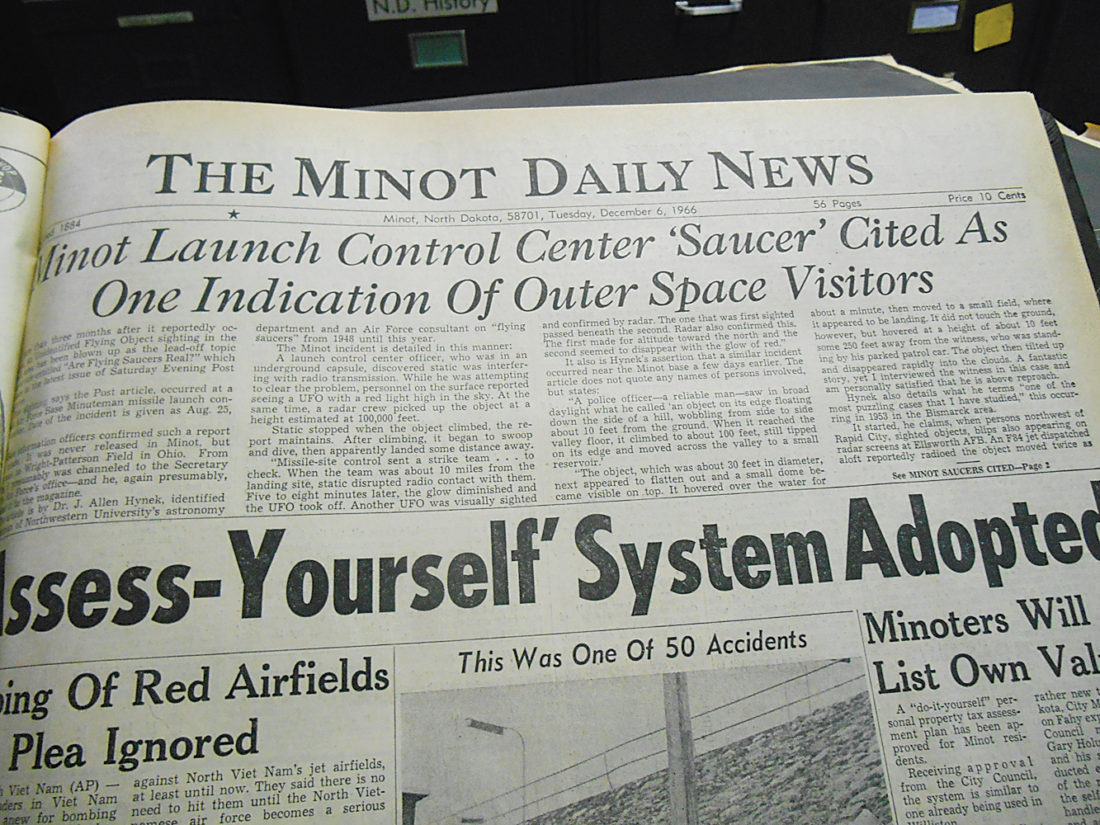 Eloise Ogden/MDN This photo shows the front page of the Minot Daily News on Dec. 6, 1966, when the newspaper ran a story about unidentified flying objects seen in the local area.

Capt. David D. Schindele was a Minuteman I intercontinental ballistic missile launch crew commander in the Minot Air Force Base missile field when he experienced a situation in which a flying object took down all 10 of the nuclear-tipped missiles he was responsible for, causing them to be unlaunchable. That was 50 years ago.

Air Force officials instructed Schindele never to speak about the incident and as far as he was concerned, it never happened. Schindele was at a launch control facility near Mohall when the incident occurred.

On Dec. 6, 1966, the front page headline of the Minot Daily News on Dec. 6, 1966, read: “Minot Launch Control Center ‘Saucer’ Cited As One Indication of Outer Space Visitors. The story told about UFO incidents in the Minot area.

“It Never Happened, Volume 1,” is the title of Schindele’s new book about the Air Force’s cover-up of the UFO (unidentified flying objects). 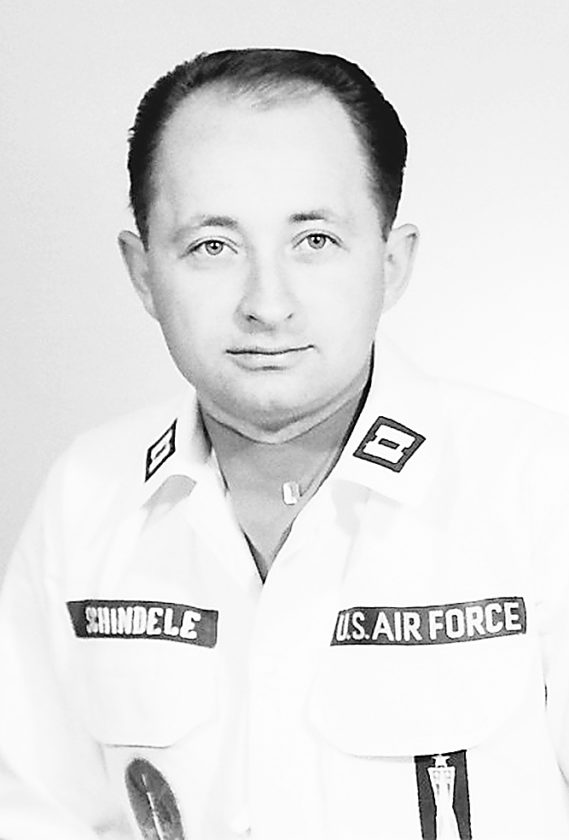 Submitted Photo This photo of Capt. David D. Schindele was taken at Minot Air Force Base when he was a Minuteman I intercontinental ballistic missile launch crew commander in the 1960s.

“During that time in Minot, many of us experienced unworldly incidents at Minuteman facilities but we were all individually instructed to keep silent. We never realized at the time that others among us were also experiencing incidents, but now the truth is becoming known,” Schindele told the Minot Daily News.

Schindele said a number of years ago he learned about a similar incident experienced by another missileer and that led him to writing his book.

“About 35 years after my Minot incident and learning about an identical incident experienced by another missileer (Capt. Robert Salas) connected to Malmstrom AFB in Montana, which was during the same general timeframe as my incident, I then contemplated coming forth with the ‘truth,’ “ Schindele said.

Schindele said it took him another five years before he related his experience on his website and began to inform close friends of his experience.

“After discovering in 2010 that other missileers with me at Minot also experienced associated incidents, I then decided to conduct extensive research on Air Force cover-up to find out exactly why the Air Force told all of us to keep our ‘lips zipped.’ We all had top secret clearances, but that was not enough to allow the Air Force to provide truth to us, or to explain the incidents. We were all kept in the dark and never trained on how to manage such incidents and situations should they reoccur. It was a very disconcerting time for all of us,” he said.

It was during his research and documenting information beginning in 2010 that Schindele said he knew he must produce a book on his findings.

“It was a six-and-a-half year effort, but I also realized that a second volume would be needed to make it complete,” he said.

Schindele said there’s another aspect to this that must be understood.

“There are many Minot missileers who have taken their ‘secret’ to their grave, while some hold onto the secret to this very day because of very great trepidation involved,” he said. “With the passing of more than 50 years since my incident at Minot and 70 years since the incident at Roswell, (N.M.) there can be no ethical, moral, or critical reason for keeping the secret from humankind any longer, and my other missileer friends agree with that. This is further reviewed in Chapter Seven of the book.”

Schindele said that mainly he wants to provide the truth.

“From the beginning, I’ve been conflicted with the goal of bringing truth to as many people as possible, while having no appetite for bringing attention to myself or receiving monetary benefit. But I also realize the fallacy in that,” he said.

Schindele and his wife, Diana, reside in Mukilteo, Wash., north of Seattle. They have been married for 20 years and have a combined family of four adult children and eight grandchildren. Schindele grew up in the Seattle area and attended Washington State University. His parents both grew up in North Dakota – his mother at McGregor and his father at Tolna – and attended the University of North Dakota at Grand Forks.

Schindele said he and many others who were missileers during the same time period get together about every year and a half for a reunion, although their ranks are increasingly being depleted. Their next reunion will be in Las Vegas next February.

Schindele’s book is available at Amazon.com. Proceeds will go to the Seattle Chapter of the Air Force Association.

Submitted Photo This photo of Capt. David D. Schindele was taken at Minot Air Force Base when he was a Minuteman I intercontinental ballistic missile launch crew commander in the 1960s.

Eloise Ogden/MDN This photo shows the front page of the Minot Daily News on Dec. 6, 1966, when the newspaper ran a story about unidentified flying objects seen in the local area.