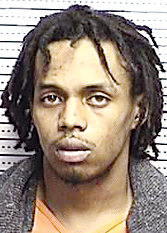 A 24-year-old Minot man has pleaded not guilty to firing shots into an occupied apartment on Jan. 4, participating in an attempted robbery at gunpoint of the Cash Wise grocery on Jan. 7 and later on Jan. 7, pistol whipping a young woman and shooting and paralyzing a young man.

Javontez Denane Barnes entered the pleas at an arraignment on Tuesday in district court in Minot.

Barnes is charged with four counts of Class C felony reckless endangerment for the Jan. 4 incident and with attempted murder, a Class A felony, aggravated assault, a Class C felony, and robbery and burglary, both Class B felonies, for the incidents on Jan. 7.

According to a probable cause affidavit filed with the court and testimony by Minot Police investigator David Goodman on Tuesday, Barnes fired the shots into an apartment in the 1800 block of 2nd Street SE on Jan. 4. He had allegedly gotten into a dispute with Randolph Dashiell Garbutt when Garbutt stopped Barnes from hitting Barnes’ girlfriend. Barnes was locked out of the apartment and allegedly fired several shots through the locked door.

Raissa Carpenter, the defense attorney for Barnes, argued during the hearing on Wednesday that reckless endangerment charges should not stand. The bullets went through a kitchen wall and into the back bedroom of the apartment. Two women in the apartment were in a back bathroom and it wasn’t clear where the two men were located at the time, Carpenter said, so none of them were in immediate danger. Carpenter also noted that Garbutt had first given police a different account of who fired the shots and later recanted and told police the second story. Judge Richard Hagar didn’t agree with those arguments and found probable cause to let the reckless endangerment charges stand.

On Jan. 7, Barnes and Garbutt reportedly went to the Cash Wise grocery store at 3:38 a.m. Anthony Noble, the cashier who was on duty that night, testified Tuesday that the men picked up several items and went through the checkout line. Barnes paid for the items and when Noble opened the cash register, he testified that Garbutt pulled a gun and demanded money. Noble said he told the men there were cameras in the store. Garbutt responded that he didn’t care and still demanded the money. Noble testified that he refused to give Garbutt the money and walked away. Garbutt and Barnes then left the grocery store.

Shortly after 4 a.m. on Jan. 7, Barnes and Garbutt are said to have gone to a south Minot apartment, possibly to buy marijuana from victim Cody Davis. They left once and then later returned and pushed past Brittany Ripple, Davis’s roommate, when she answered the door. They told Ripple that they were looking for Barnes’ phone because they thought he had left it upstairs during their first visit. She found this strange because Barnes had not gone upstairs during the first visit to the apartment. Barnes and Garbutt went into Ripple’s bedroom and started rifling through drawers. Ripple followed them and confronted them, because she believed they were stealing her tips. She fought with Barnes, who struck her with a heavy object and knocked her out. The woman later received medical treatment and doctors found she had suffered a concussion and broken bones in her face.

Davis was shot through the lungs and the spinal cord. His mother, Nicole Peltier, who was staying in an adjoining apartment, heard a shot. She contacted an ambulance and the authorties to report the shooting. Goodman testified that Davis is unable to remember anything that happened that night and police have pieced together the story based on the physical evidence. At a previous hearing, a lawyer for the state said Davis was left paralyzed.

Goodman testified that Garbutt had once made the claim that he was the one who beat Ripple and Davis, but he didn’t believe what Garbutt had said. Ripple identified Barnes as the man who hit her with the heavy object and other evidence was used to identify Barnes as the shooter at the apartment. Garbutt is charged with accomplice to attempted murder as well as burglary and robbery for the Jan. 7 incidents.

Both Davis and Ripple were referred to as “John Doe” and “Jane Doe” throughout much of Tuesday’s hearing, but Goodman referred to them by name on one occasion on the stand. They were also identified in a probable cause affidavit initially filed with the court. The state later redacted their names from other documents, citing Marsy’s Law, which protects victim rights.

An online GoFundMe page set up to raise money to help pay for medical expenses for Davis also identifies both Davis and his roommate, Ripple. The GoFundMe page can be found at https://www.gofundme.com/support-cody-allen-davis.

Ward County Assistant State’s Attorney Marie Miller also had questioned whether Carpenter should continue as Barnes’ attorney since Carpenter previously represented a man that the state plans to call as a witness at trial. Carpenter said she has thoroughly investigated and neither she nor her supervisor believe that there would be a conflict. She has raised the matter with Barnes and also tried to contact the current lawyer in another case for the proposed witness. Hagar said he would honor Carpenter’s judgment and allowed the preliminary hearing on Tuesday to continue with Carpenter as the lawyer for Barnes.

A pretrial conference for Barnes is scheduled for May 31 in district court in Minot before Hagar.