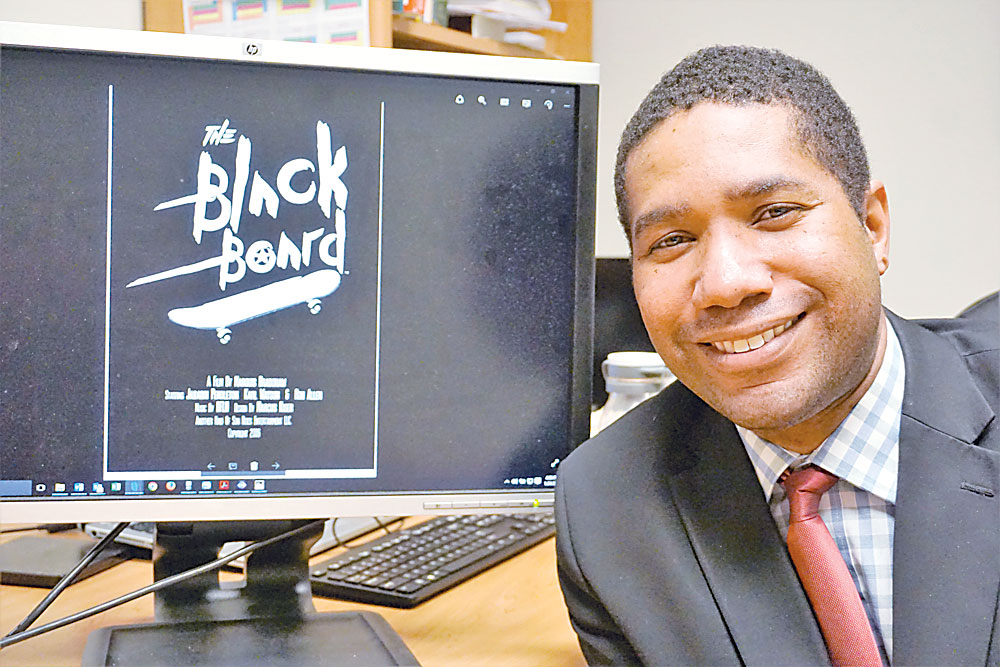 Jill Schramm/MDN Marquis Bradshaw’s experiences with skateboarding led him to produce his documentary, “The Blackboard.”

As a teenager, Marquis Bradshaw spent many hours on a skateboard, although typically well away from his local neighborhood. Skateboarding wasn’t cool in black communities in the 1990s.

Until about 10 years ago, African Americans who chose the skateboard over a basketball or football could expect ridicule and rejection from peers for engaging in what was considered a white, suburban sport. It took the embrace of rap and hiphop to make skateboarding socially acceptable, and for Bradshaw, it was more than a cultural shift. It was a piece of black history in America that needed to be told.

Bradshaw, a Minot attorney and filmmaker, explored the issue of racial identity among African Americans through the lens of skateboarding in producing “The Blackboard,” a documentary released last year. Six years in the making, “The Blackboard” was an award-winner at the 2016 San Francisco Black Film Festival in June.

“African Americans have allowed celebrities to set the precedent of what’s acceptable within the black community,” Bradshaw said. “It’s really access – people seeing other people who look like them. It says basically it’s OK if you do that. This (film) examines the issue of racial identity through the issue of skateboarding. I have gotten a lot of positive feedback from people of lots of different races.”

To assemble a cast, he contacted dozens of professional black skateboarders, most of whom did not respond. One who did was Solomon Mosley in Atlanta. Bradshaw spent a weekend filming Mosley. He also filmed amateur skaters in North Carolina and Detroit, where he met a young woman whose boyfriend was a professional skater in San Francisco. She helped him make connections with the skater, who introduced him to a number of other professionals who had fought against racial expectations to excel in their sport.

Among them was Ron Allen, one of the nation’s first black professional skateboarders and one of the first to obtain a major corporate sponsorship.

His film interviews parents of skateboarders. Bradshaw said he was fortunate his mother supported his passion. Some other skaters had been forced to hide their activities. One professional skateboarder told Bradshaw his parents, unable to dissuade him from skating, had taken him to a psychologist. The psychologist determined he was a normal kid who just liked to skate, and over time, his parents came to take pride in their son’s accomplishments.

The film contrasts the experiences of older skaters with young skaters who grew up in a more welcoming environment.

The 38-minute documentary has been shown in various California locations and in Wisconsin, Pennsylvania and at overseas film festivals in Croatia and Brazil. Bradshaw attended the film’s premiere in San Francisco last year, but his work as an attorney with the Minot public defender’s office keeps him too busy to follow all the film’s travels. Some of the stars of “The Blackboard” have attended festivals to speak about the film.

Bradshaw is working with a French company for film distribution to television markets and has hired a New York marketing firm to help him reach other media markets. “The Blackboard” has been highlighted by Ebony Magazine, The Ride Channel and other prominent news outlets. The trailer can be viewed online at https://vimeo.com/155486200.

“The Blackboard” also is personal for Bradshaw.

“I was the only black kid in my neighborhood who skated,” said Bradshaw, 35, who grew up in North Carolina and New York. He took up skateboarding at about age 10 after seeing the sport on television and thinking it looked cool. At the time, he didn’t realize that skateboarding was unacceptable.

“I faced a lot of backlash and ostracism in the black community,” he said. “I internalized a lot of that and it influenced me negatively. I felt ashamed for skating.”

He couldn’t let it go, though.

“It was a passion. In school, I would just think about skating. I would draw pictures of me skating and doing skate tricks,” he said.

Because he had white friends who skated, he could stay at a friend’s house on weekends or at times during the summer so he could skate. When his mother went to work downtown, he would ride along so he could skate in a part of town where his neighborhood wouldn’t see him.

Over the years, he had opportunity to travel around the country and skate with others from various backgrounds.

“Skating brought a lot of people together from a lot of different backgrounds. It kind of unified people through their skateboards,” he said.

“Around the time I quit skating, it was still taboo within the black community,” he said. That began to change in 2006 after rapper Lupe Fiasco made a music video, “Kick, Push,” that showed black youth skating and overcoming obstacles in an urban environment.

“After he released that song you started to notice a shift. You started to see more black kids on skateboards,” Bradshaw said.

“At first, I think there was some bitterness,” he said. He had sensed people were jumping on a bandwagon without appreciating skating the way he had.

Skateboarding as a pop-culture phenomena was a turnaround for even non-black communities because skateboarding previously hadn’t been truly accepted as a legitimate sport generally.

“It used to be more counter-culture. It existed in the shadows of society, and it was very underground,” Bradshaw said.

The way skateboarders learned was from videos, and it was only natural that they would pick up cameras and start shooting videos of their own. Bradshaw said he and his friends bought cheap VHS cameras and became skilled at filming while using their skateboards as rolling dollies.

Later, watching Zoom Culture videographers film a segment for television’s “Hip Hop Nation,” he struck up a conversation with the crew, which led to a chance to work with the company. He worked for a time as an independent videographer, filming sports action for various television shows.

In college, he assisted a friend in making a documentary called “The Jitterbug: Pioneers of the Jit,” about a street dance developed in Detroit in the 1970s by a trio of brothers.

He more recently assisted another friend, Halline Overby, with filming for a documentary on Roy Ayers, a famous jazz fusion artist. Filming was done in California and New York, and Overby now is in the editing phase.

Bradshaw foresees more film-making in his future, although he’s having to work around his court cases. The strong economy and need for attorneys in western North Dakota brought him to Minot in 2013 after graduating from law school at Wayne State University in Detroit. He considers Minot to have been a smart move, given the breadth of legal experience he’s been able to gain in a few years.

After setting aside the skateboard, Bradshaw took up dance and started black dance organizations in law school and in college, where he earned an undergraduate degree in history. History and the arts will always be his passions, said Bradshaw, who also fits law into those categories.

“I look at law as an art form. “I look at a trial attorney as being on stage,” he said. “You get to be very creative in crafting oral arguments.”

(Prairie Profile is a weekly feature profiling interesting people in our region. We welcome suggestions from our readers. Call Editor Mike Sasser at 857-1959 or Regional Editor Eloise Ogden at 857-1944. Either can be reached at 1-800-735-3229. You also can send e-mail suggestions to msasser@minotdailynews.com.

Cheyanne Rose Marie Swain, 23, was sentenced on July 2 in district court in Mountrail County to three years in ...

A house damaged by fire in southwest Minot last fall should be demolished, the Minot City Council decided ...

The Wings and Wheels event planned at the Dakota Territory Air Museum, Minot, next week has been canceled. It was ...

Emma Marie Weisberg, 25, Minot, is charged in district court in Minot with Class B felony intent to deliver ...