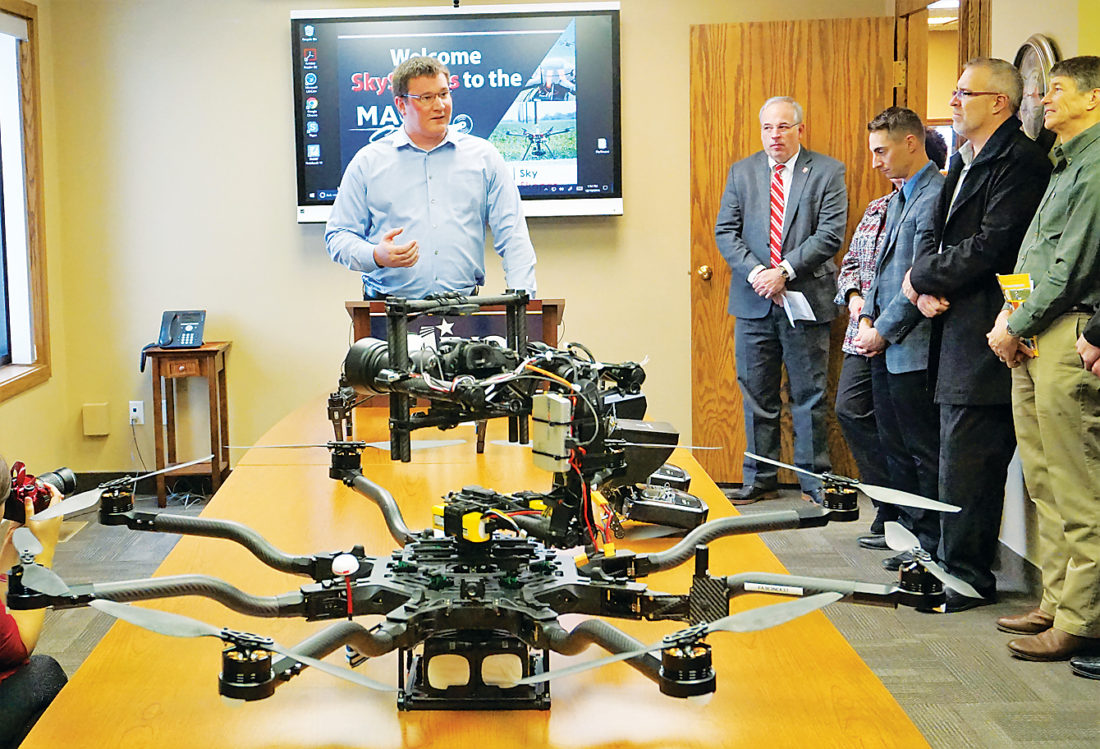 Jill Schramm/MDN Drones were on display as Matt Dunlevy, president and founder of SkySkopes speaks at a news conference announcing the company will be opening an office in Minot.

Drones will be flying more frequently in western North Dakota if SkySkopes has its way.

The Grand Forks company joined Minot Area Development Corp. Monday in announcing it is expanding its North Dakota operations and opening an office in Minot in partnership with Ackerman-Estvold, a Minot engineering firm.

The announcement marks Minot’s entry into a technology field targeted by MADC in its new MAGIC Sky initiative. MAGIC Sky is aimed at promoting the city as a destination for unmanned aerial systems companies.

“Minot is the first of many expansions in terms of new office locations that will serve as a staging points for our company. It means a lot to us that that first would be in the state of North Dakota,” said Matt Dunlevy, president and founder of SkySkopes.

SkySkopes, a national leader in UAS, offers the most advanced, commercially available drones, with ability to collect infrared, electro-optical, thermal, LiDAR and other types of aerial data. The company is expanding into Minot to reach a broader, potential market in the Bakken oil industry.

Commercial uses of drones include maintenance of energy infrastructure, such as flying transmission lines, pipelines and wind turbines. Drones also are used for aerial photography, precision agriculture, insurance adjusting, energy audits, law enforcement and could have future use by technology companies for deliveries of products or wi-fi. SkySkopes uses its drones largely for energy infrastructure inspections and energy audits. The company worked with North Dakota State University on precision agriculture applications and has done storm damage assessments.

Initially in Minot, SkySkopes will be employing drone pilots through Ackerman-Estvold.

“I am extremely confident in their ability to execute missions with birds such as this one,” Dunlevy said, referring to the Freefly Alta 8 on display. The company expects to employ at least five pilots within a year, with five aircraft stationed in Minot.

“Being the sky is the limit, we don’t know if there could be a lot more, requiring more assets,” Dunlevy said.

The SkySkopes drone weighs about 25 pounds and can handle any type of sensor. Without a payload, it has a flight time of 35 minutes, or with payload, about 15 to 20 minutes, which amounts to a distance of two to three miles.

Dunlevy said SkySkopes meets or exceeds federal regulations. SkySkopes contacts property owners in the area of a flight, although not required by the Federal Aviation Administration. It alerts the FAA whenever within five miles of an airport, which exceeds FAA safety standards.

According to MADC, drones have many military and commercial uses, and SkySkopes has shown it can save businesses up to 70 percent in costs.

“SkySkopes is a leader in North Dakota’s unmanned aerial systems industry and so their ongoing growth across the state and their connection to our post-secondary institutions fits perfectly into the University System’s Nexus ND initiative. Minot State University looks forward to working with SkySkopes and providing new opportunities for our students and our graduates,” Shirley said. “New and emerging industries such as unmanned aerial systems are exactly the kinds of areas where North Dakota needs to be focused so we have a diversified economy prepared to lead the nation and the world in the decades ahead.”

Brian Opp, manager of aerospace business development with the North Dakota Department of Commerce, said the state has invested more than $37 million in the last decade into the drone industry.

Much of the development of the state’s industry has occurred in Grand Forks. SkySkopes started there as the first North Dakota company approved by the FAA to fly unmanned aircraft for business purposes. Employing nearly 20 pilots, the company’s operations have expanded nationally and internationally.