Serkis on why the world needs a new ‘Christmas Carol’ 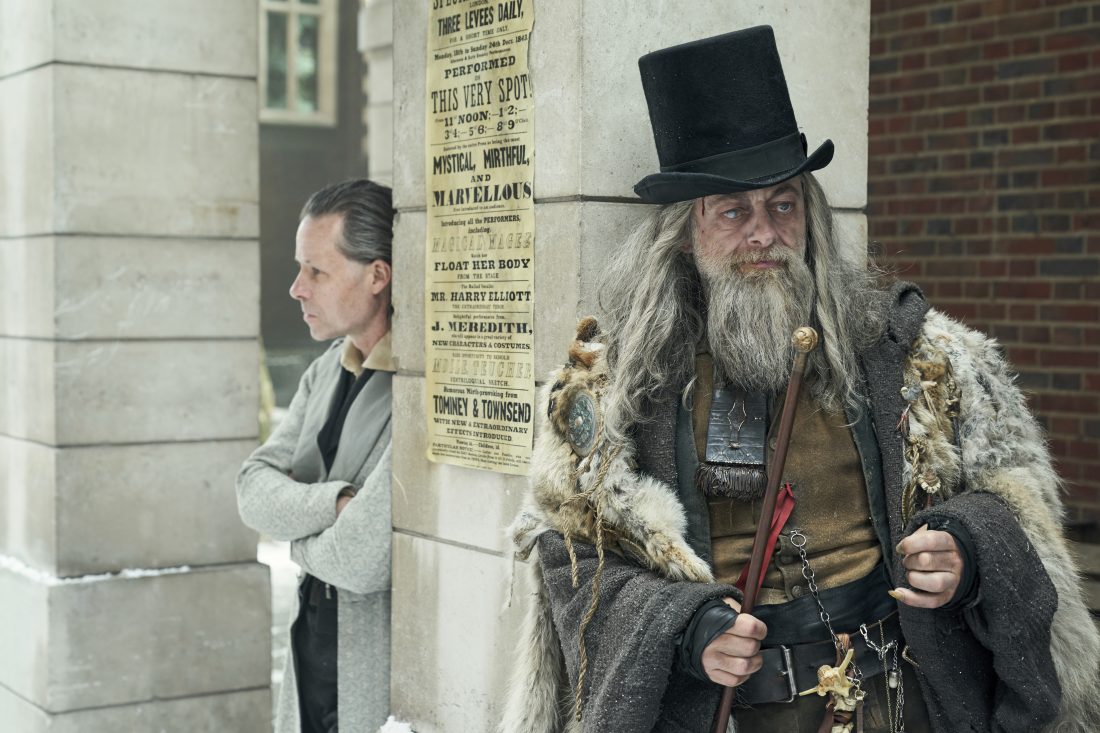 This undated photograph provided by FX Networks shows actors Guy Pearce as Ebenezer Scrooge, left, and Andy Serkis in character as the Spirit of Christmas Past in the movie ‘A Christmas Carol.’ Actor Andy Serkis says the FX Original version of the classic Dickens tale is plugged into the modern zeitgeist. Serkis plays the ghost of Christmas Past and Guy Pearce plays a tormented Scrooge. (Robert Viglasky/FX Networks via AP)

LONDON (AP) — Wearing a tall black hat, a heavy mottled fur coat covered in trinkets, a long beard and plenty of hair, Andy Serkis received a round of applause from the crew of “A Christmas Carol” after thanking them for their hard work on the set.

An hour later, he emerged clean shaven and delighted to be “derigged” from his garb as the Spirit of Christmas Past — a pagan-inspired look he describes as “total sensory deprivation.”

“I don’t think I’ve ever worn such an uncomfortable costume,” said Serkis. “The costume’s really heavy. I’ve got an eye which is kind of a milky eye which I have no peripheral vision out of the right-hand side of my face. I’ve got long fingernails.”

It didn’t help that this festive offering was shot during a heat wave in July.

Even the colder night shoots were no relief. “I thought, I’ve got the best costume, I don’t need a warm set coat. But then it started raining and I realized when my costume started getting wet, it weighed about five times as much,” Serkis said.

This new version of “A Christmas Carol,” starring Guy Pearce as Ebenezer Scrooge, aired as an FX Original Movie on Dec. 19, with encores Dec. 22, Dec. 24 and Dec. 25.

Serkis, who is perhaps best-known as the actor behind the computer-enhanced character of Gollum in “The Lord of the Rings” and “Hobbit” films, talked to the Associated Press on set in Hertfordshire, England, after wrapping his part in the production of “A Christmas Carol” last summer.

He described shaving off the heavy beard as “joyous.”

Despite the discomfort of his “facial accoutrements,” this was a project Serkis couldn’t turn down.

Coming from “Peaky Blinders” creator Steven Knight, this version of the classic Charles Dickens story was “plugged into the zeitgeist,” Serkis said. The script appealed to him, he said, because although it told the tale “through a 19th century lens, it feels incredibly contemporary — philosophically and emotionally and politically.”

“Everything is transactional in the world of Scrooge. Everything has a currency and a value and a monetary value. So, I think that sort of ultra or uber capitalist view is very much what Steven has been trying to grapple with,” Serkis said.

Serkis loves Dickens and isn’t surprised there have been so many screen versions of his work.

“At the end of the day, who needs another Christmas Carol?” he asked. “There’s so many ‘Christmas Carols’ and there’s so many versions of every Dickens story. But when you have a production company and a writer and a creative team that have such a unique and specific take on the source material, then it’s something you’d love to be involved in for sure.”

Also on the set, Pearce’s Scrooge looked pale, tormented by his past. In his hand-sewn, Victorian-tailored costume, he looked quite different from the stripy bed socks, night cap and comedic grumpy demeanor of many other interpretations.

“He’s so wary of the cliché of presenting a Dickensian character. He wants him to be totally emotionally truthful, very, very subtly pulled back. It’s a tightrope, but he’s avoided all of the trappings of any version of this character I’ve seen before. He’s really very mean-spirited, yet still, a grain of you feels some empathy toward him, even though he’s incredibly hard and refuses to be drawn into any kind of an emotional release,” Serkis said.

As for modern-day parallels, when asked which political figures could benefit from Dickens’ lesson on altruism, Serkis laughs.

“I don’t think the imagination has to stray too far really … There are quite a few who could do with having the mirror held up to themselves, put it that way.”