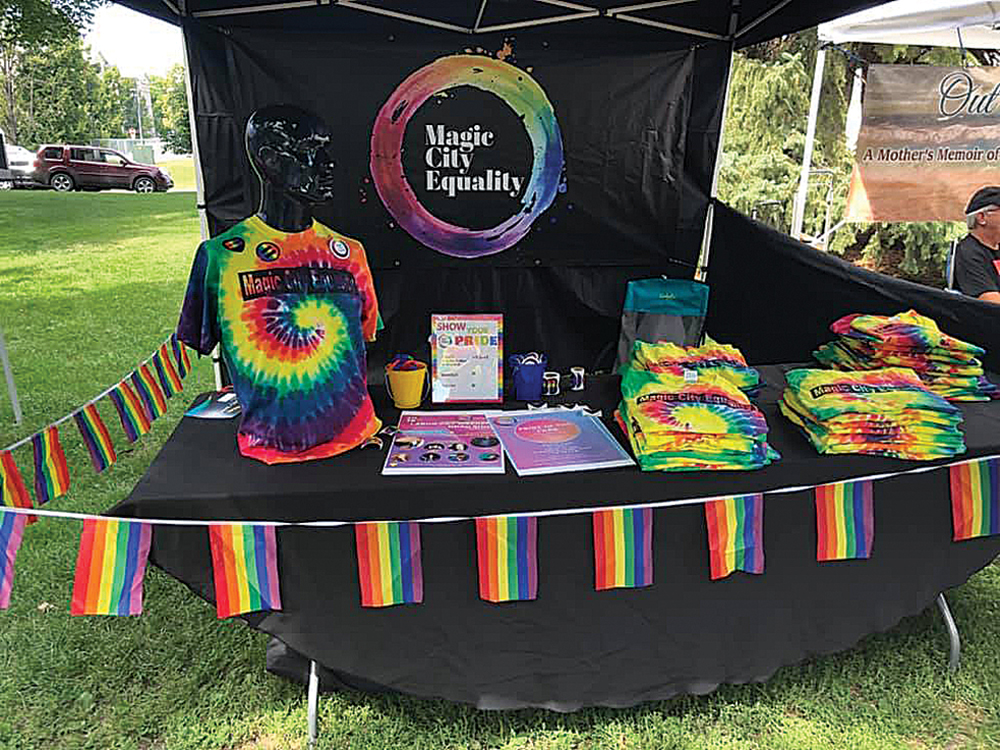 Submitted Photo Magic City Equality has traveled to different Pride events across the state and are excited to be bringing Pride in the Park back for another year Saturday.

After their initial Pride in the Park celebration had to be canceled due to rainy weather, Magic City Equality is finally back with a new date to celebrate and has added more fun to the day. On Saturday, members of the community can hang out at Roosevelt Park and celebrate the LGBTQ+ community. Then, as the day turns to night, people can head to the Grand Hotel for the Labor Gay Weekend drag show that is open to all ages.

Pride in the Park

The original Pride in the Park was scheduled for June 29, but due to heavy rains that left the Roosevelt Park grounds soggy, Magic City Equality was forced to change the date of the event. The initial date was picked because it was the 50th anniversary of the Stonewall Riots.

“Due to safety hazard issues, we decided to reschedule it for August 31,” said Jorden Laducer, Magic City Equality treasurer. “It was difficult in the sense that we felt that we were letting people down.”

The group picked Labor Day weekend for the rescheduled date to be able to include as many people as they could in the celebration after having to shut down and reschedule on such short notice.

In addition to celebrating those a part of the LGBTQ+ community, Laducer stressed that the event is for everyone.

“You don’t have to necessarily be gay, bisexual, transexual — anything under the rainbow, including an ally, are all welcome,” Laducer said. “We want to make sure everyone is included and that people don’t feel that they are left out. Our events are full of love and compassion, not only for the community, but also to our brothers and sisters across the rainbow.”

Pride in the Park will take place Saturday from 11 a.m. to 4 p.m. and is free to attend. The event will include educational information as well as local vendors and businesses.

“We’re going to be having live music as well,” Laducer said. “We have bands coming in that are going to be performing from the start all the way to the end of Pride in the Park.”

Arny’s 2.0 will be providing a beer garden for adults that want to relax with a drink while they listen to the live music. Different food trucks will also be available at the event.

On the other side of the park is going to be a kids section that will include temporary tattoo artists giving 10 free tattoos per hour, face painters, bounce houses and rock painting.

“It’s great to see a familiar face coming all the way from Fargo and coming down here to his home area to support as well,” Laducer said. Boschee will start speaking at 12:30 p.m.

In the past, Magic City Equality noticed that drag shows that coincided with other events seemed to be bigger and better. So as the celebration winds down at Roosevelt Park, the community can shift the party to the Grand Hotel for the Labor Gay Weekend drag show.

With queens and kings coming from around the state, Labor Gay Weekend is going to be one of the biggest drag shows Magic City Equality has hosted.

“We added this show because it was Labor Day weekend and we want to make sure everybody can not only come to the Pride in the Park but also have fun at the show since it’s going to be all ages as well,” Laducer said.

Doors open at 8 p.m. at the Grand Hotel with the show starting at 9 p.m. All ages are invited, but those 18 and under must be accompanied by an adult.

Tickets for the show are $15 and proceeds will be going toward youth outreach. They will also be selling reusable straws at the event with proceeds going to the American Cancer Society.

“A few board members lost a dear friend due to cancer, so we wanted to make sure his memory still lived,” Laducer said.

Raven Knight and BJ Armani will be the hosts for the evening. The show will feature River Styxx and Eva Cleare Fiyera, both winners of 2019 Miss Over the Rainbow. Kara Fiyera, a local Minot queen, will also be in the show. The oldest drag queen in the state and Minot resident Gimme’ Pillsen-Licher will also be performing at the show. Also performing are LiquoRite Hipster and MssKarri out of Fargo.

“All the drag performers, kings and queens, are all different in their own right,” Laducer said. “They bring a different aesthetic to different shows and that’s one thing Magic City Equality is so proud of…it’s a drag show that is able to capture all the audiences’ tastes.”