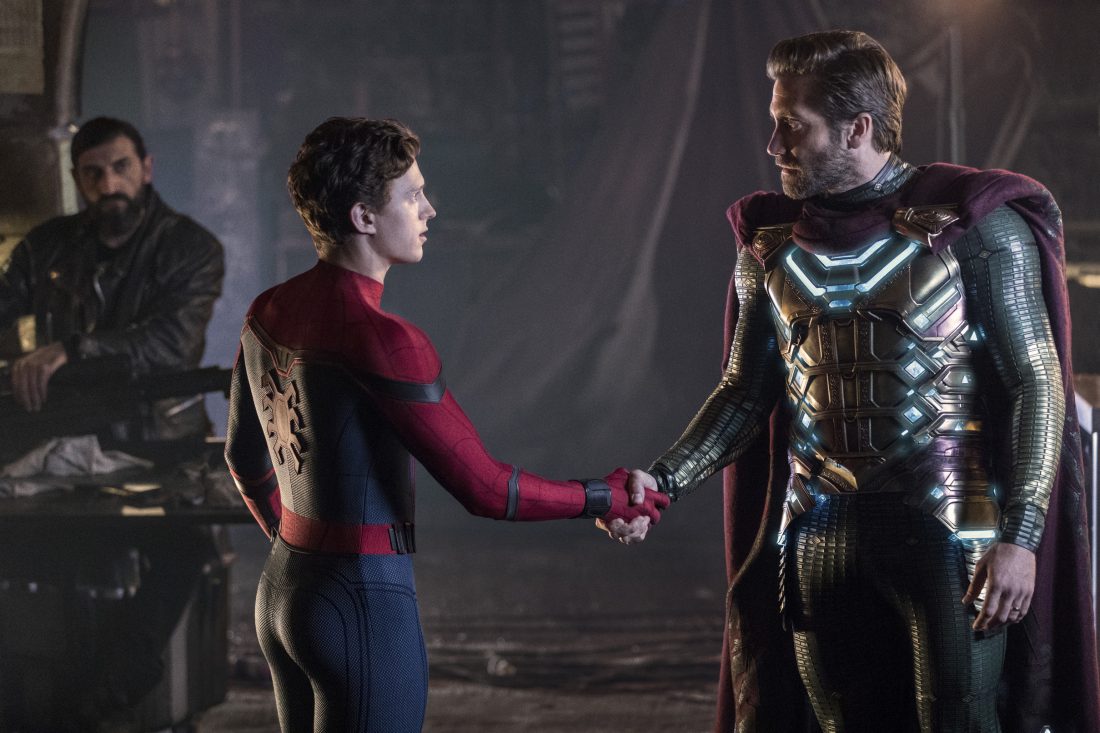 This image released by Sony Pictures shows, from left, Numan Acar, Tom Holland and Jacky Gyllenhaal in a scene from "Spider-Man: Far From Home." (Jay Maidment/Columbia Pictures/Sony via AP)

-Man: Far From Home” begins. After an emotional and strenuous last few movies with the Avengers, a break sounds nice. “I didn’t think I had to save the world this summer,” he complains.

But, you know the drill: With great power comes great responsibility. So it’s just a matter of time before Parker’s European school trip is interrupted by mayhem that requires a webslinger. We’re just glad the filmmakers didn’t also take a vacation as well.

In this ambitious and ultimately successful sequel to “Spider-Man: Homecoming,” Parker trades New York’s Coney Island and the Staten Island ferry for such iconic cities as Venice, Berlin, London and Prague. Seeing him swing from ancient bell towers instead of Manhattan skyscrapers is weirdly thrilling.

The first half of “Spider-Man: Far From Home “ could stand alone — Parker juggles trying to romance the tough-but-vulnerable MJ (the always welcome Zendaya) while also fighting giant monsters beside a ragtag group of superheroes. Perhaps it’s a little underwhelming, but it’s solid. Just stick around: Things get positively bizarre in the second half as the film shifts up a few gears, turning into a kind of commentary on filmmaking illusion itself. It goes from sunny pop to acid jazz, from “Saved By the Bell” to “The Matrix.”

Speaking of school, viewers who haven’t yet seen “Avengers: Endgame” have some homework to do before watching Tom Holland pull on the red-and-blue suit this time. “Far From Home” takes place immediately after the meta-conclusion of all 22 films in the Marvel Cinematic Universe and assumes you know what happened. Plus, it might be a school night, but don’t even think about leaving the theater before catching the two post-film codas.

Director Jon Watts returns, adding to the great work he did in the first film, and screenwriters Chris McKenna and Erik Sommers, who helped write “Homecoming,” make their own homecoming. So does Jon Favreau playing Happy Hogan, Marisa Tomei as Aunt May and Jacob Batalon as Parker’s best pal, who this time ditches the nerdiness to show off a man-of-the-world Ned.

Borrowed from elsewhere in the Marvel Universe are Cobie Smulders as S.H.I.E.L.D. agent Maria Hill and a snarling Samuel L. Jackson as Nick Fury. Spider-Man gets to play this time with a pair of high-tech eyeglasses that are an advanced tactical intelligence system, much like he interacted last time with his suit’s computer, Karen. (Alas, no cameo this time from Stan Lee, the Marvel icon who died in 2018).

Jake Gyllenhaal, who has proven to be an actor of tremendous range, is a newcomer to the superhero genre but proves a comfortable fit despite being asked to wear one of Marvel’s oddest costumes. As Mysterio, he dons a huge cape, Roman Empire breastplate, giant gauntlets and a big glass bubble over his face like an upside-down goldfish bowl. But as Will Smith might say, Gyllenhaal makes this look good.

Credit to him and costume designer Anna B. Sheppard, who has concocted four Spider-Man suits, including a “stealth” one that gets him the nickname Night Monkey in Europe. And the trippy visual effects that stun in the second half connect not to the first film but to “Spider-Man: Into the Spider-Verse” — a huge complement since that one was animated.

But let’s be honest: The thing keeping this together is Holland. He is utterly endearing as a goofy, insecure now-16-year-old hero with a cracked cellphone and who often makes things worse, apologizing along the way. Holland’s aw-shucks naiveté is a 1950-ish throwback even though he is firmly in 2019 — taking selfies while in the air and having to be reminded to not text and swing at the same time. He is indeed a Spidey for Generation Z and its fitting that he hits the reset button for Marvel.

is rated PG-13 for “sci-fi action violence, some language and brief suggestive comments.”

Three stars out of four.