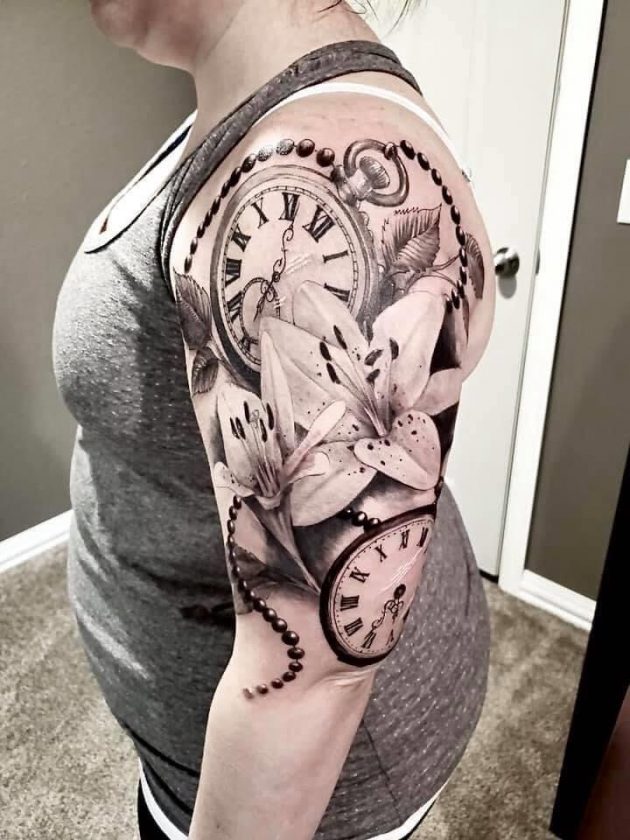 The couple moved to Velva from Colorado in March during the pandemic. They had family in Colorado, but it wasn’t what they were looking for. The Bowmans know people in Velva and, originally, came up for a vacation.

“One thing led to another,” Sarah Bowman said, “and there was a niche here for tattoos. So then we decided to kind of dip our toe in the pond and everything just kept working out.”

The building was up for rent, and the previous occupant had been very crafty.

“He did some snowboard lessons when he was younger,” Sarah Bowman said, “but he just kind of gravitated towards art.”

She told a story about how her husband and his brother would sit on their mother’s lap and draw for hours. They both loved art so much that they decided to become tattoo artists.

“It was just kind of in their nature,” Sarah Bowman added.

Her husband specializes in large freehand tattoos that consist of black and shades of gray. Some of his clients would go in for multiple sessions throughout a span of two to five years to have sleeves done or tattoos that cover a large portion of their bodies.

The couple met each other at a tattoo convention in Wisconsin. The first piece that Sarah Bowman saw her future husband do was a large back piece that went halfway up the client’s neck and down to his belt line. It had multiple animals, including a tiger, a wolf and others.

When Chad Bowman isn’t in the gym, he draws and paints in his free time. Some of his works are strategically placed in the studio. Most of his work is still in Wisconsin, but they’re hoping to make a trip to get some of the bigger pieces.

He has done tattoos for Sarah Bowman, as well. She described tattoos as “a display of art, and it’s all about being comfortable in your own meatsuit.” He has also done tattoos for his wife’s friend, who watches the television show, “Supernatural,” in which the characters refer to bodies as “meatsuits.”

For Chad Bowman to get his license to tattoo in North Dakota, he went through the variance process. He took a CPR training class and obtained special training to keep himself and his clients safe from bloodborne pathogens. Hepatitis B is another thing to mindful of in the world of tattooing, and he received the vaccine series for it as a preventative measure.

Sarah Bowman does the piercings and has been into body modification since 2005.

“I think it all started back when 30 Seconds to Mars came up with the music video for ‘The Kill,'” she said. In the music video, the lead singer, Jared Leto, is wearing black eyeliner and has black hearts painted on his thumb nails.

“That was just this magical moment, sitting there with my MSN dial-up,” she said.

Before she got into piercing, she was a phlebotomist for nine years. She had an opportunity to get into body modification and she took it.

Even though they opened the business for tattoos, Sarah Bowman cannot begin doing piercings yet. COVID-19 has slowed down the process of getting her North Dakota piercing license. She’s hoping to have it by July 1 to meet the demand. She does a lot of different piercings, but she is currently not doing surface piercings or dermals.

As per health guidelines, she has to have a separate “biohazard room” for piercings. After she gets her North Dakota piercing license, her next step is to be Association of Professional Piercers accredited. With that accreditation, Darker Studio will be the third shop in the state to have it.

Sarah Bowman mentioned their shop’s policy for getting tattoos and piercings is the client must at least be 18 years of age. The North Dakota law for piercings says the minimum age is 15, but she wants to be on the safe side and set their own policy.

When it comes to tattoos, there may have been cases in the past anywhere in the country that someone younger than 18 said their parent or guardian gave permission to get one, but they actually didn’t.

“Then it gets hard to verify if parents have different last names, birth certificates. It’s a lot of paperwork,” Sarah Bowman said, “and then just also getting tattooed is a big deal.”

She continued that clients should really think about what they want on their bodies, as tattoos are permanent. There is the option of having it removed, but that can be just as painful as getting the tattoo done and expensive to boot.

Body art and modifications have been important to the Bowman couple for several years, and it will more than likely be that way for many more. Not only do they share their love of creativity with each other, they share it with many others and give people a permanent piece of art to carry with them.