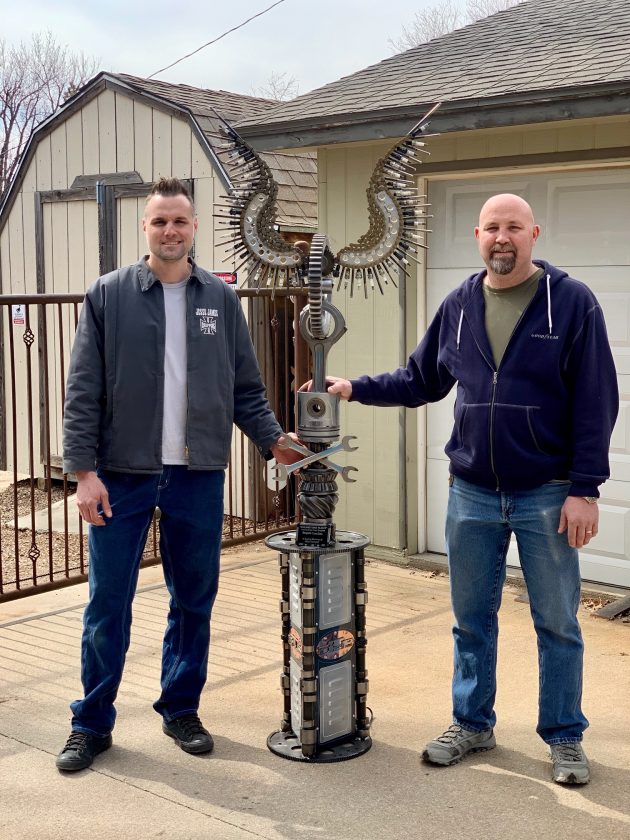 Submitted Photo Clint Burgardt, right, was given a handmade sculpture made out of repurposed parts by his brother Rusty Burgardt, left, in memory of their father-in-law, Mike Hemphill.

Clint Burgardt received a very unexpected and meaningful gift from his younger brother in memory of their father-in-law.

Burgardt is the current owner of Harry’s Tire Service and Dakota Truck and Farm. He moved to Minot in January 2011 to learn the family business. He then bought the businesses from Mike Hemphill in January 2016 and has done some renovations. In October 2017, Hemphill passed away.

In memory of Burgardt’s mentor, his younger brother, Rusty Burgardt, welded at least a dozen types of used car parts and pieces of sheet metal together to create a 7-foot sculpture, titled “Dreams Take Flight.”

“I didn’t know (Rusty) was building it,” Clint Burgardt said. “He asked for a PDF of the logos and that gave away that he was up to something.” He didn’t know what that something was, but he was surprised when he saw it.

“Dreams Take Flight” took Rusty Burgardt 43 hours to make. One of the pieces that the younger Burgardt used had been lying around for about 10 years before it was incorporated into something creative.

The sculpture had been built down in Garden City, Kan., where Burgardt KustuMetal is based, owned by Rusty Burgardt. In order to make it a bit easier to transport back to North Dakota, it was designed to be split into two pieces. Clint Burgardt estimated that it weighs “about a couple hundred pounds.”

Behind the logos at the bottom that had been cut into metal sheets, Rusty Burgardt had at first tried using red LED lights because the logos for Harry’s Tire Service and Dakota Truck and Farm are red. However, it just didn’t look right, so Rusty Burgardt tried blue LEDs instead, preferring how those looked.

Rusty Burgardt also applied heat to change the color of the metal, adding shades of blue, purple and others. His nine-year-old son spent many hours cleaning old spark plugs. The spark plugs on both wings at the top match on each side.

On many parts, light blue pinstriping was done by George Valincia, without stencils. “He did it all by hand,” Clint Burgardt said. He mentioned that his younger brother already knew that he wanted Valincia to be the one to do the pinstriping. They collaborated together and kept up the work until it was finished.

“Dreams Take Flight” is on display behind the counter at Harry’s Tire Service for everyone to see. The wonderful gift is something that the Burgardt brothers will remember for a lifetime.