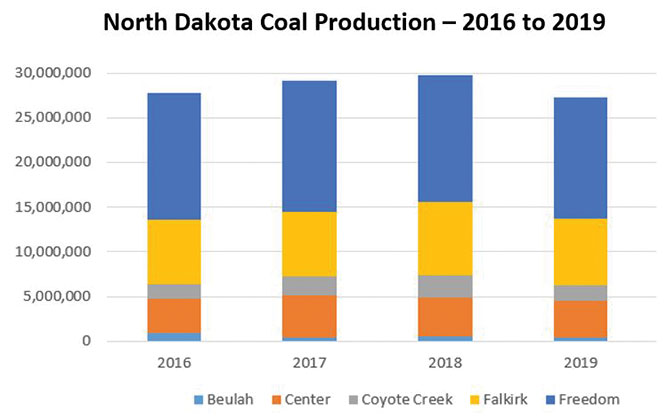 North Dakota has seven lignite-based power plants, which consist of 12 individual units. Normally, each unit has a major outage every three years. For comparison, three years ago, the lignite mines produced 27.7 million tons in 2016.

The Coyote Creek Mine produced 1.7 million tons in 2019 with the drop-off in severed coal due to a major planned outage last spring at the adjacent Coyote Station, south of Beulah. Other power plants that had major outages in 2019 included the Heskett Station by Mandan, ND, the Antelope Valley Station north of Beulah, the Milton R. Young Station near Center, and the Coal Creek Station between Washburn and Underwood.

“North Dakota’s five lignite mines continue to be a supplier of low-cost fuel for power plants,” said Jason Bohrer, president and CEO of the Lignite Energy Council. “The lower tonnage in 2019 also resulted partially from electricity produced from other sources including natural gas, wind generation and the Garrison Dam, which put pressure on lignite-based power plants in the state.”

The largest lignite mine in the United States – the Freedom Mine north of Beulah – produced more than 13.5 million tons of lignite and sold them to the Antelope Valley Station, Leland Olds Station and the Great Plains Synfuels Plant. All three plants are owned by Basin Electric Power Cooperative.

North Dakota’s second largest lignite mine is operated by the Falkirk Mining Company near Underwood. It produced 7.4 million tons in 2019, which were sold to Great River Energy’s Coal Creek Station and Spiritwood Station.

North American Coal Corporation owns the Freedom Mine, the Falkirk Mine and the Coyote Creek Mine.

The Center Mine, which is owned and operated by BNI Energy Inc., produced 4.1 million tons in 2019. The mine supplies fuel to the Milton R. Young Station, which is operated by Minnkota Power Cooperative.

The smallest mine is Westmoreland’s Beulah Mine, which produced 418,000 pounds for the Heskett Station, owned and operated by Montana-Dakota Utilities Co.

“The lignite industry is unique in that our plants are generally adjacent to the mines, which reduces, if not eliminates, transportation costs,” Bohrer said. “It also means that our state benefits from the jobs associated from both the mines and the power plants along with low cost, reliable electricity generated from lignite.”

Van Dyke is vice president of communications of the Lignite Energy Council.

Trinity Health announced that Bonnie Mattern, a healthcare executive with more than 20 years of management ...