The Depot restored to its original glory 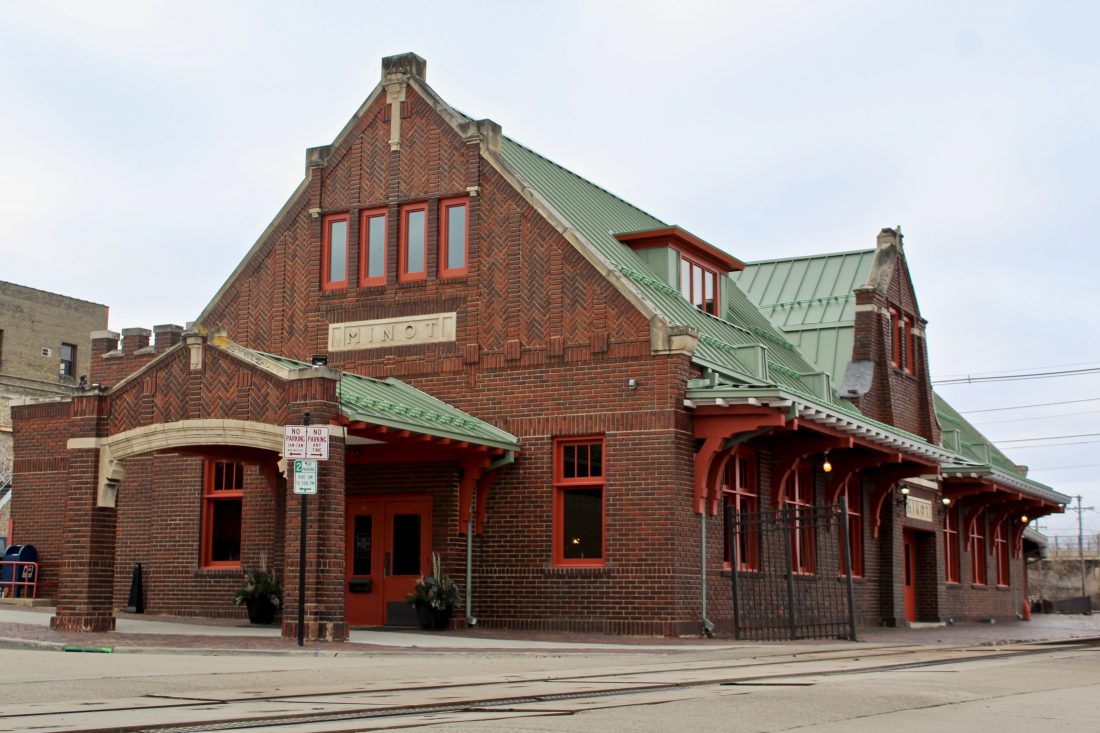 Ashton Gerard/MDN The Depot’s exterior received new coats of paint, new windows and a completely new roof. The venue has plenty of parking to the north side and visitors are able to utilize downtown Minot’s street parking and parking ramps.

Originally built in 1912, the Soo Line Passenger Depot was a hub of transportation for downtown Minot. Over the years, the building has gone through a few phases and changes, but the Ackermans wanted to restore the building while bringing it up to code and opening it to the public for everyone to enjoy it once more. Rolly and Vicki Ackerman bought the land to restore the building and their daughter-in-law, Jessica Ackerman, will be running the event space.

“The building obviously was used by C.P. Rail, the Soo Line at the time, and the Montgomery family in 1978 had taken this and restored it at that time and turned it into their insurance agency,” Rolly explained.

Dr. Dennis Lutz had owned the property for the past 30 years and turned the space into a museum. According to Ackerman, Lutz had been approached by a few different people to take the property off his hands, and eventually trusted Ackerman’s vision for the old passenger depot.

“Our family’s part in this was to take this building and restore it, that was my primary concern,” Rolly said. “I wanted to do this project so it’s going to last for another 100 years for the Minot residents to enjoy.”

A very important part of the project for Rolly was to restore the building to replicate its original design in 1912. The roof, although no longer copper, has a copper appearance. They redid the plaster on the ceiling and brought the building up to code with a fire suppression system and accessible restrooms. 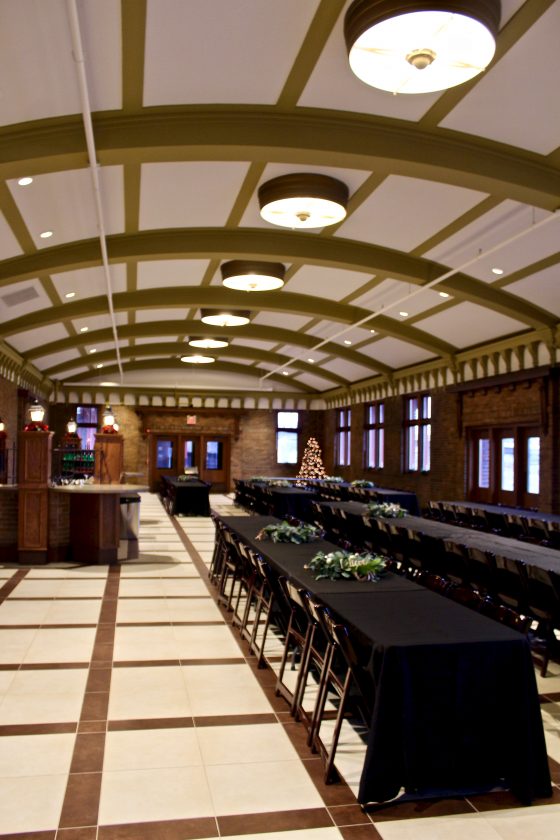 Ashton Gerard/MDN The interior of The Depot was completely restored and brought up to code. The event space is now available and open to the public along Minot’s historic Main Street in downtown Minot.

“We sent off our troops out of this building, we had presidents that were at this building speaking, so there’s a lot of history in here,” Rolly explained.

There is an upstairs area that will be completed in a separate phase as an additional event space. The upstairs was once full of offices but has been cleared with the exception of one office.

“We’re open as an event venue,” Jessica explained. “I think when you look back at the history of the building in 1912 and think about how people gathered indoors and downtown back then and how important it was to the community to have a facility like this, it’s almost like we’re doing that all over again over 100 years later; to create a space for people to celebrate some milestone in their family or with friends.”

Not only was it important to make the restoration historically accurate, Jessica has a goal to reignite the passion for coming together and gathering downtown and sees The Depot as a chance to do so.

So far, The Depot has hosted a number of private events, commercial gatherings and entertainment events.

With the event venue, The Depot has a partnership with Elevation to provide food and beverage service for events. Currently, Elevation will cater the space but there are plans to bring a more inclusive service in the future.

“We’re going to be putting in a full kitchen so, in the meantime, they are able to cater like they do to other events and have food buffets and food stations,” Jessica explained. “Eventually there will be a full kitchen so we can serve plated meals that complement events that ask for that kind of service.”

They will also be restoring the baggage building in the future and are hoping to utilize the space between the buildings as a patio area or an escape during different events.

“The other unique thing when I started working down here was the number of people that are taking photos here all the time,” Rolly commented. “Class pictures, wedding pictures, just people that are walking around — it’s crazy.”

They had opened The Depot during the tree lighting and holiday train last year to give people a place to escape the cold even though the venue was not nearly finished yet. Rolly and his wife Vicki heard a lot of comments from people who had never been inside the building and were excited to see what it would turn into.

Now, it’s officially open to the public and becoming a renewed staple in downtown Minot.

“When somebody puts some love into a building in downtown, like (Rolly) has here, it’s such a complement to the rest of the work that’s been done with the infrastructure project, the parking ramps, and what others are doing downtown,” Jessica said. “It feels like we’re part of that new breath of fresh air into downtown.”

To learn more about The Depot and what they are doing in downtown Minot, visit them on Facebook, @TheDepotMinot, or visit their website, https://www.thedepotminot.com/.

On Thursday the U.S. Senate overwhelmingly ratified the U.S.-Mexico-Canada Agreement (USMCA), an update to the ...

T-Mobile, a mobile telecommunication company, is opening at Dakota Square Mall in February as part of the ...

Make this the year you stop wasting food (and money)

Who hasn’t felt the shame of a refrigerator purge? You’re sentenced to face the forgotten leftovers, fuzzy ...

Tom Larson has been promoted to senior vice president of ag and commercial lending at First Western Bank & ...

Recover from your holiday spending hangover

Happy New Year! The holidays can be such a joyous time of year, but so much time and effort to plan and prepare, ...