90 years of family and growth 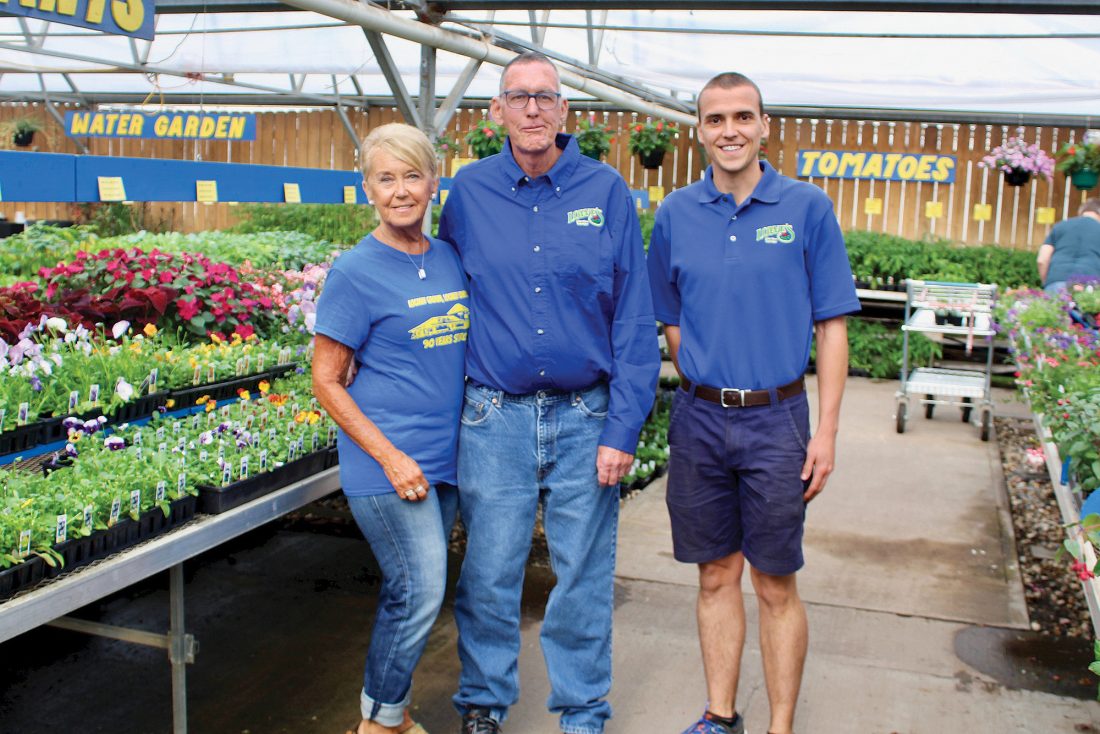 Ashton Gerard/MDN Two generations of Lowes, Karol and Phil Lowe and Kristofer Williams, pose for a photo inside the nursery at Lowe’s Garden Center Thursday in Minot.

As the days get longer and the temperature gets warmer, many people in Minot have turned to Lowe’s Garden Center to help kick-start their gardening season.

The garden center has been a locally owned and operated business in Minot for the past 90 years and will be celebrating their 90th anniversary this week and weekend as a thank you to the community that has supported them throughout the decades.

“It’s an amazing family thing,” Phil Lowe said. “I’m the third generation so it’s quite an achievement for a local business to go on for 90 years.”

Albert Lowe ran a local grocery store before the garden center was ever a thought. It was located where The Ice Box is currently at 100 Third Street NE. It was Lowe’s Grocery from the 1920s to the 1940s.

“It was before the days of food inspection so farmers would have chickens and they would bring their eggs in and cream in to sell at the grocery store,” Phil explained.

A befuddled Phil asked the man where his grandfather scrounged up $3,000 and, apparently, he hadn’t. The man said it was a barter deal, where Lowe took the land and the man’s family was able to shop from the grocery store for free for four years.

The beginnings were humble, as Lowe’s started with a chicken coop and a small variety of vegetables that were grown to sell at the grocery store.

In 1939, Phil’s parents, Clarice and Jim, took over the business and slowly made the transition from being a truck or market operation to a bedding plant operation -which is what Lowe’s is today – while adding two greenhouses.

“In other words, they sold the things that we’re selling now – spring flowers and vegetables people plant in their yard,” Phil said. “They made that transition slowly over many years.”

In the beginning, Lowe’s was strictly a spring and summer operation with work starting in the greenhouses in February and March while the season ended at Memorial Day.

When Phil graduated college in 1973, he came back to the family business and decided they needed to expand their business to be a year-round operation.

“I’m young and dumb and ambitious and I said you can’t run a business like that so we jumped into the floral business and landscape and nursery and all these other things,” Phil explained. “Now it’s 45 years later and we never have any slow time here.”

Where Lowe’s is going

As Phil has gotten older now, he has been thinking of passing on the business. His son James L. Lowe, who was a very active part of the business, unexpectedly passed away after being diagnosed with cancer in August of 2018.

“Karol and I will be 69 so it’s kind of like how long can we physically keep doing this,” Phil explained. “Karol’s son Kris approached us and said he’d be interested in purchasing the business and continuing it on.”

Phil now has the opportunity to breathe a sigh of relief as he gets to continue to remain a part of the business and see the business continue to grow in Minot while also being able to step away when he wants or needs to.

“It’ll probably take us two or three years to transfer it all over but it’s the best scenario for us, I think,” Phil said.

Kristofer Williams, Karol’s son, included in the deal that Phil and Karol could stay on the property where Phil has lived all his life. They get to keep their home and have the gift of being able to watch the business go forward and grow.

“We have had all our family events out here in the past, it didn’t feel right going somewhere else and was a certified public accountant so the business aspect I had an idea of,” Williams said. “There’s a heck of a lot more problems around here that I’ve learned to deal with even in the short time that I’ve been back here but it’s an institution in Minot and it’s important to me that it stays in the family.”

For Williams, coming back and working at Lowe’s doesn’t feel like work at all, much like it is for Phil and Karol. The family genuinely enjoys what they do and what they offer to the community and are excited to see it grow in a new direction.

“It means a lot to us and a lot to the community,” Karol said. “We have customers that their grandparents came here and we see friends year after year with stories of years prior so it truly is a family business that has grown with the community.”

“It’s a wonderful thing, but it’s a trust that has to be earned every day,” Phil said about having the community’s support for the past 90 years. “Everyday we have to have good customer service, good quality plants and fair pricing.”

This week starting on Wednesday, Lowe’s Garden Center will kick-off their 90 year anniversary with some deals around the center. Over Father’s Day weekend, they will be grilling hot dogs, have popcorn, cotton candy and other treats for the community to enjoy.