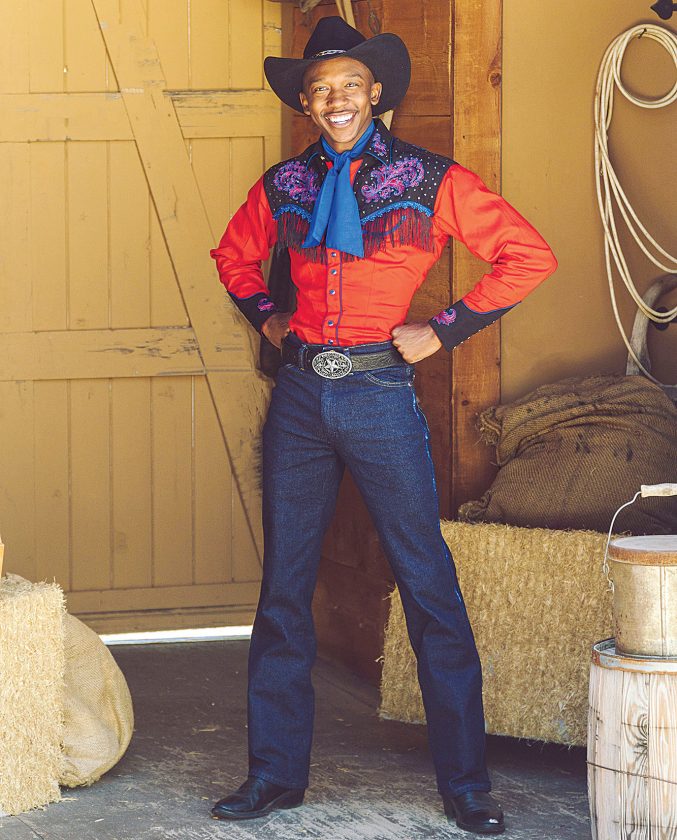 Submitted Photo J’Kobe Wallace is a new addition to the 2020 “Medora Musical,” in his bright red shirt, blue ascot and cowboy hat.

The “Medora Musical” of 2020 has three new faces, and Minot theater enthusiast J’Kobe Wallace is among them.

Wallace is one of the two new North Dakotans to join the cast of the musical. In addition, a new co-host has been introduced to the stage.

Wallace has been into theater since his freshman year at Central Campus High School in Minot. He graduated from Minot State University with a degree in music education, hoping to work with and teach students about theater and what it has to offer.

Most recently, he had been traveling with the Bright Star Touring Theatre. While traveling with the children’s theater, he had a lot of free time on his hands when they weren’t performing, and he wanted to line something up as a summer job. One of his friends mentioned that Curt Wollen, the director and producer, was looking for audition submissions for the Medora Musical.

Wallace contacted Wollen and sent a video audition. Not too long after, he got a phone call from the director. Wallace was offered a part as a Burning Hills singer, and he took it. One of the musical numbers called “Always North Dakota” is broken down into two solos. Both describe what North Dakota is like. The rolling hills, the plains, fun things about the state and much more are included. Wallace said he was lucky enough to get one of those parts.

Rehearsals started at the end of May down at the Burning Hill Theatre in Medora. Being in the Badlands, the weather can get hot, making it tough some days to continue rehearsing after an extended period of time. The cast push through it and make as much progress as they can.

The Medora Musical begins at 7:30 p.m. Mountain Time on June 19. The musical will start at 7:30 p.m. Monday through Friday. On Saturday and Sunday, the performance will begin at 8:30 p.m.

After July 4, they will be adding another weekend show that starts a 5:30 p.m.

“If you enjoy a lot of high energy, talented singer and performers, this is the play to go to,” Wallace said. “If you want to know anything, you’re going to get a treat. It’s heartwarming!”