Take a trip under the sea 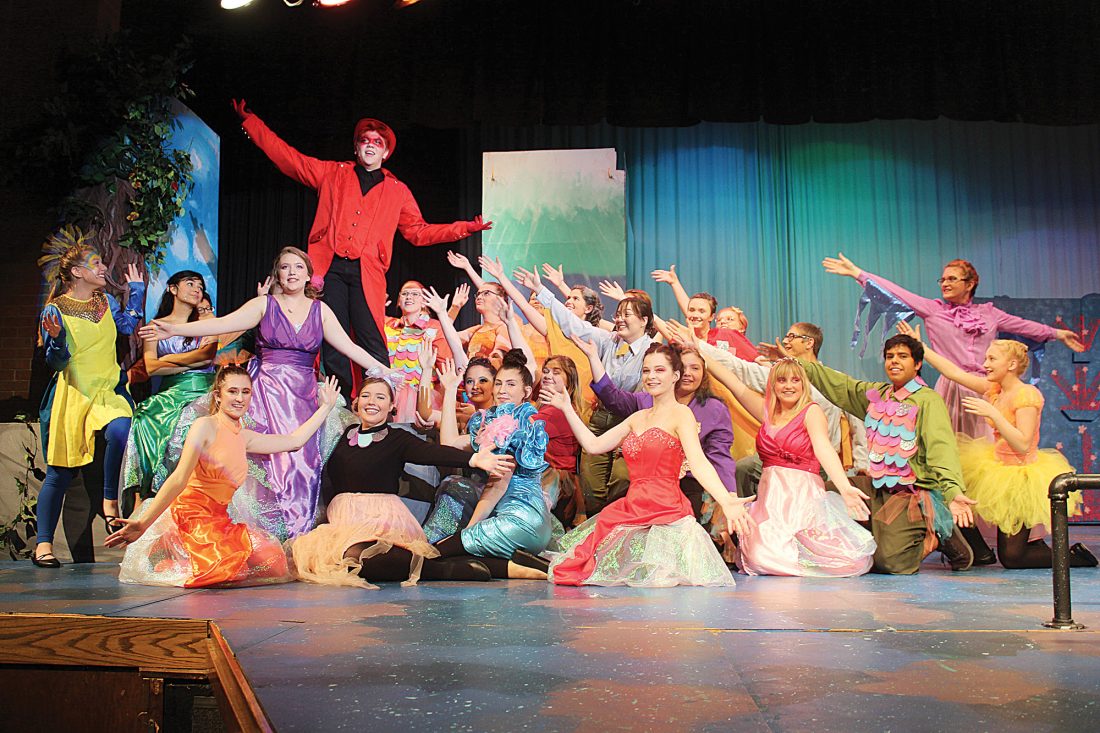 Submitted Photo Sebastian (Jett Swanson) tries to convince Ariel that life is better under the sea.

The Minot High School Playmakers are taking audiences under the sea with their season opening performance of “The Little Mermaid” beginning tonight at 7 p.m. at Magic City Campus.

“When I took over the theater program here at Magic City Campus this fall, we combined the Central Campus and the Magic City one and made a 9-12 musical which hasn’t been done maybe ever,” explained director Chad Gifford. “I wanted to do something that for one, was kind of an icon thing…but also, we’re drawing talent from 9-12. There’s a lot of talented students so this show’s also really great to showcase multiple people.”

Iconic characters that come to mind when thinking of “The Little Mermaid” are obviously Ariel and Prince Eric. But with them come along Sebastian, Ursula, Scuttle, Flounder, King Triton and more. Each character is full of unique quirks and gives each actor a chance to shine on stage.

“There’s so many fun parts, not to mention just being a sea creature is a heck of a lot of fun,” Gifford said. “The idea was that I wanted to give opportunity to as many students as I could while doing something really fun and unique.”

One challenge the production has seen is trying to communicate between the two campuses. Luckily Krista Tornow, an assistant for the theater department, works at Central Campus and is able to wrangle students there and communicate any changes to them. 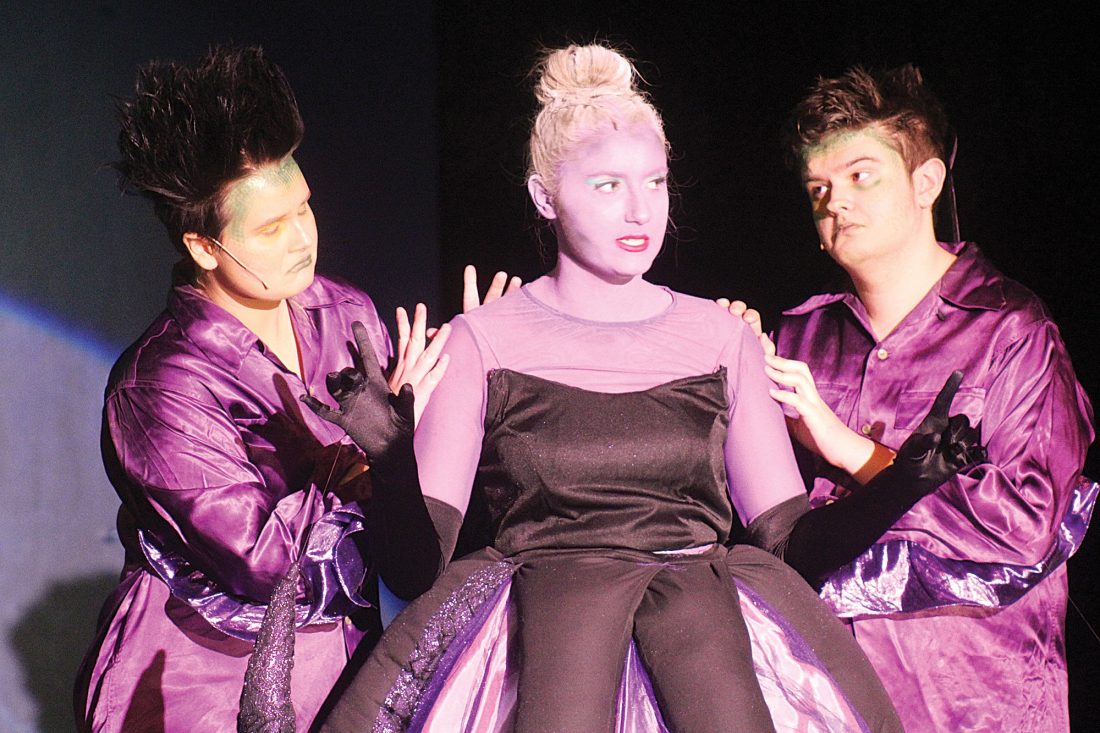 Sophomores Alexandra Brown as Ariel, and Evan Putt as Prince Eric, like that the theater programs have been combined and enjoy working with the upperclassmen on the production.

For the cast, it was fun to see “The Little Mermaid” was going to be the production that opened the school year.

“It was nice to see that we can do a Disney movie now, something we all know and love,” Putt explained. “We have something to base it off of too so it made it easier for us to get into character.”

Gifford is proud of how the entire show has come together and how the students worked around some of the technical challenges it presented.

“We have mermaids and people swimming and that kind of thing so we had to do some unique things for what the mermaids look like and how they’re interacting on land and in the sea,” Gifford explained. “We took a lot of real creative choices there. The students designed and built the costumes themselves.” 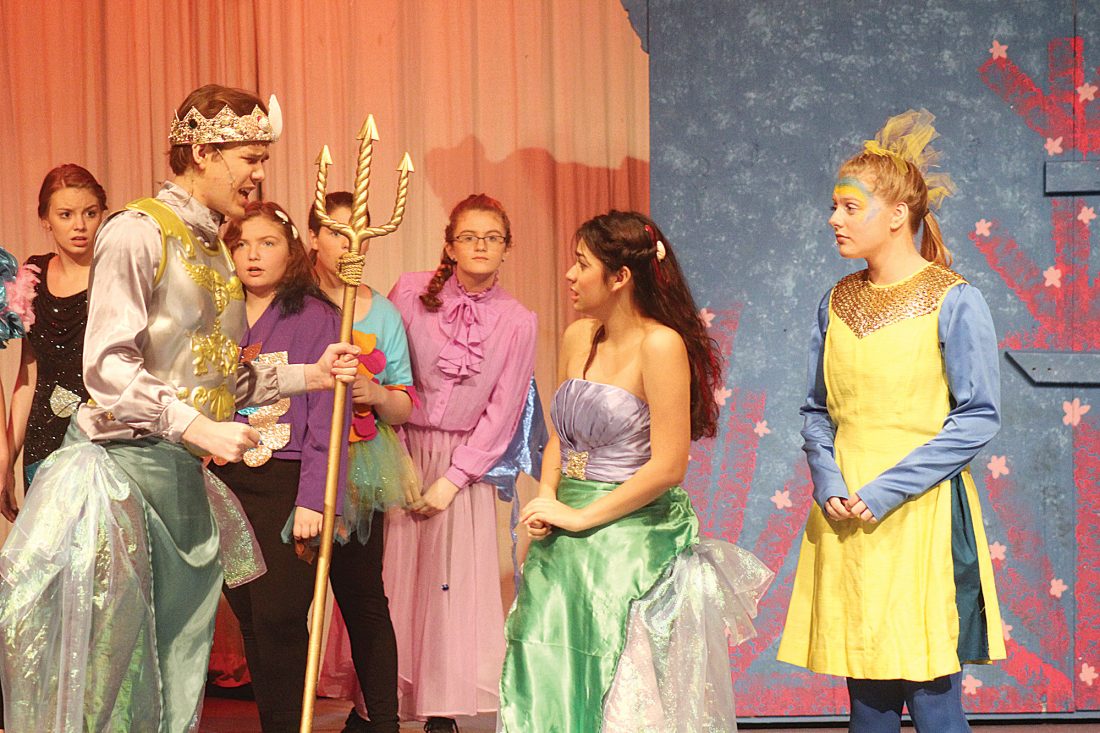 Off the stage, Gifford pointed out that the stage manager Autumn Grosz has completely taken charge of all the action on and off the stage and works in the costume shop.

“She has just been every part of of every thing,” Gifford said. “She’s in love with what we’re doing and is always trying to help out. It’s been really great seeing her come to life.”

Freshman Madison Leonard has stepped into her role as Chef Louis beautifully.

“She’s never done anything like this before and she just came in and everyday has gotten better, blows us away and is just hilarious,” Gifford said. “I think people will laugh until they hurt when she comes out and chases Sebastian (Jett Swanson) around.”

Tickets will be $10 per adult, $9 for seniors and $8 for students and are available at the door. The show will run through Saturday at 7:30 p.m. with an additional matinee performance Saturday at 2 p.m. 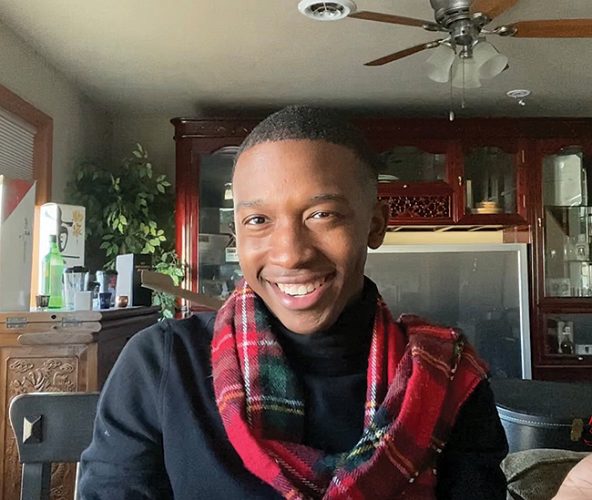