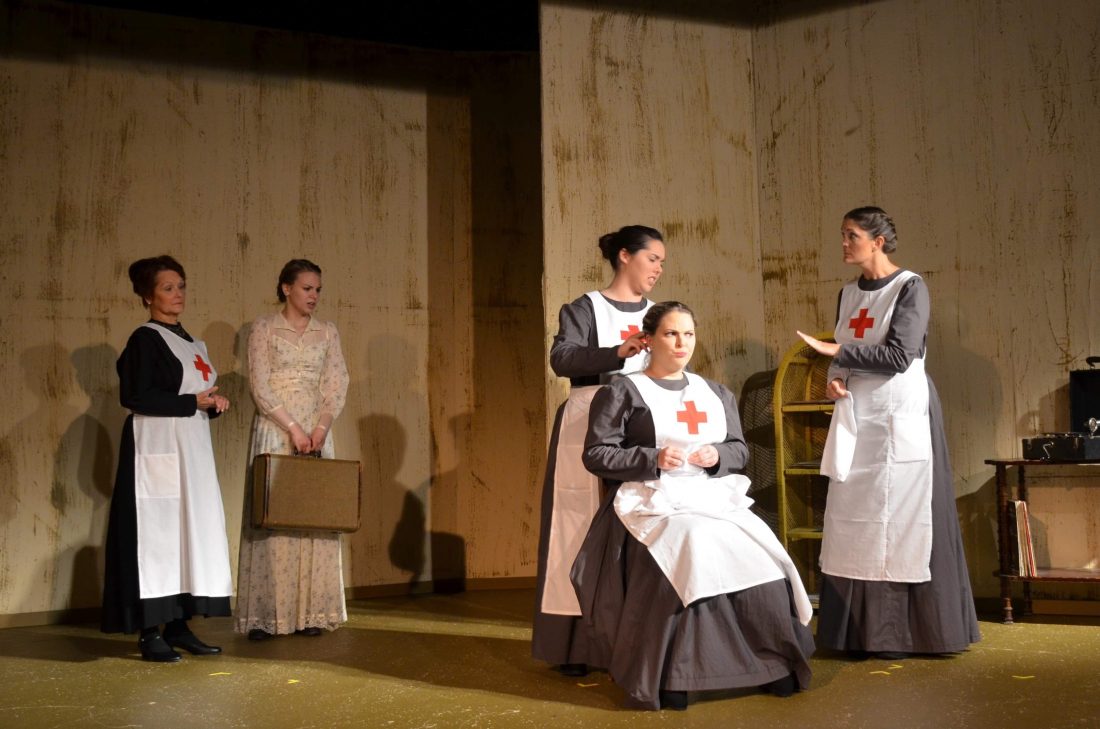 Returning for their 49th season, the Mouse River Players are opening with a new, historical drama “Somewhere in France is a Lily,” by Kate Guyton and directed by Ken Haarstad.

“We open on Friday the 13th actually,” Haarstad said with a chuckle. “That was not by design, that just happened. Good thing I’m not superstitious, right?”

Haarstad first received the script in an email in January and was immediately intrigued.

“This is a story that needs to be told,” Haarstad said.

The story follows Lily, an American girl fresh out of high school that decides to join the military as a nurse on the frontline in France during World War I.

“Lily isn’t based on an actual person, but a series of letters and journal entries that were made contemporaneously during the war,” Haarstad explained. “(Lily) serves a nurse with a contingent of British nurses and this is her story.”

The cast is made up of 14 area women and girls, which both Haarstad and a few of the actors said can be challenging to work with “so much estrogen in the room.” Even though it can be a challenge at times, the cast came together and have grown close as they prepared for their upcoming performance.

“This is definitely a different role for me,” said Molly Kostek, who plays Lily. “I normally play roles that are super sassy, and I guess Lily in the beginning is super sassy…but once she really sees what happens out there and meets all these nurses, she realizes life is more than what she’s treating it to be.”

There are a few men that will be spotlighting on stage as wounded soldiers, but all the speaking roles are reserved for the ladies.

“This is a fairly new play, it’s only been performed and produced once before,” Haarstad said. Haarstad warns the audience to have tissues ready, because while the show has some funny moments, the story is so powerful it moved some of the actresses to tears on the first table read.

“Not on stage, just sitting around the table, I got choked up even the first time,” cast member Sinie Beck said.

Lily, as she returns to the United States after the war, gets involved in the women’s suffrage movement.

“It’s kind of a nice coincidence because (2019) is the 100th anniversary of when that got started,” Haarstad said. “We’re playing into that and it fits very well.”

The actresses were drawn to the play because such heavy topics aren’t usually performed. Especially from the nurses’ angle.

“An all-women’s play about nurses, cool, and there’s not enough about World War I,” said Beck, who plays Kate. “Everything is focused on World War II because it’s more glamorous…Everybody was so pretty in the ’40s — the uniforms, the hair, the music it’s just more fun talking about the ’40s than 1917.”

Haarstad has been impressed with his cast for this first production and each person fits their role really well.

“We have a bunch of new people that have not been in any MRP productions before,” he said. “We have some returning veterans and it’s just a very nice mix of people and they’re ding a great job.”

Seeing the production come to life and watching each actress step into their role on the stage has been the best part of “Somewhere in France is a Lily” for Haarstad.

“We’re dealing with volunteer actors, it’s not like professional actors where they come in and you can expect them to work eight hours a day,” Haarstad explained. “Everybody has other lives and we work around that and make it work. But it works well.”

Even though the show is very female-oriented, Haarstad was surprised when he took a great liking to the story. He feels personally connected to parts of the story because his grandparents grew up in that era, so to see it brought to life on stage makes it personal.

For tickets and more information, visit https://mouseriverplayers.com. The rest of the shows the Mouse River Players have lined up can be seen on the website as well.

“It’s got a really positive message for girls,” Beck said about the upcoming show. “I want them to feel watching it the way we felt the first time reading it.”