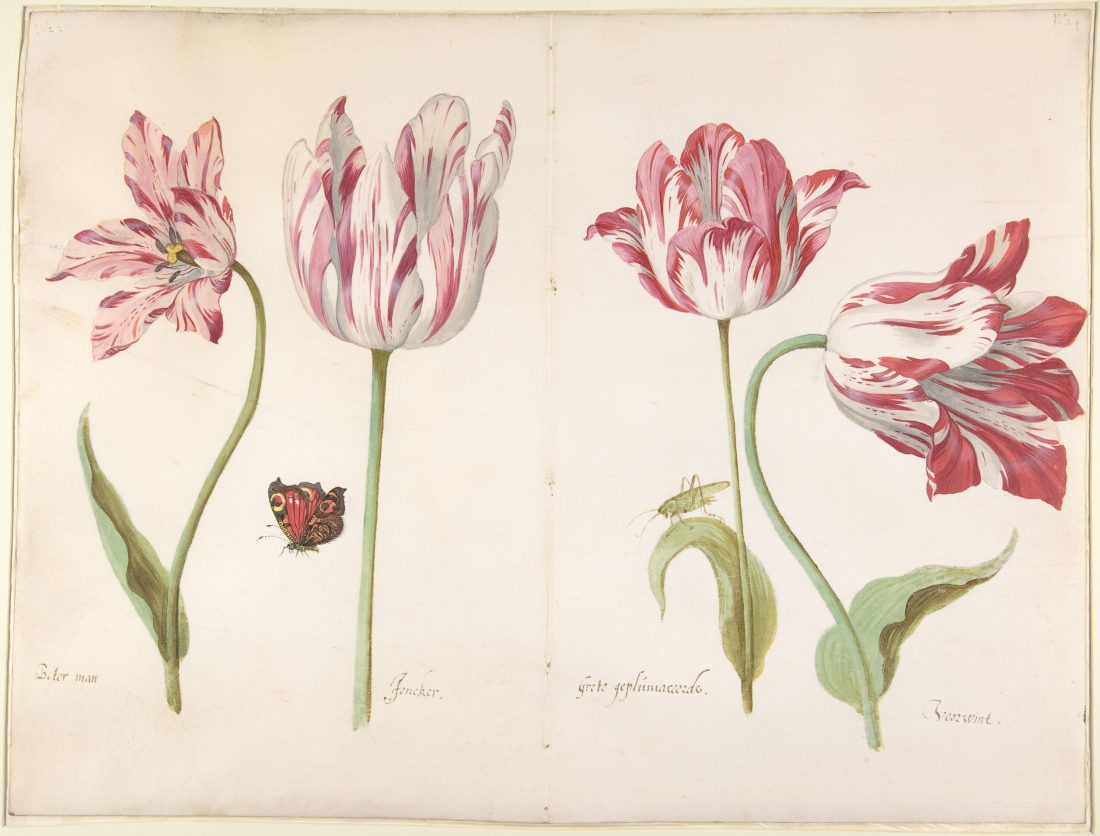 This photo provided by The Metropolitan Museum of Art shows a watercolor on vellum by Jacob Marrel titled "Four Tulips: Boter man (Butter Man), Joncker (Nobleman), Grote geplumaceerde (The Great Plumed One), and Voorwint (With the Wind)" circa 1635–45. Highly detailed botanical illustrations might seem a thing of the past. But they continue to be made, commissioned, exhibited and published. And their enduring appeal can be important today for recording and focusing on nature under threat. (The Metropolitan Museum of Art via AP)

Think of botanical illustrators, and you might envision a world of medieval herbalists, tulip or orchid collectors, or affluent young women of the 17th and 18th centuries making detailed drawings and watercolors of garden plants.

But there’s nothing old-fashioned about botanical illustrations.

“Plants and flowers eternally speak to us, and there’s a great admiration now for realistic drawings and observing nature, and a renewed interest in handmade crafts,” says Femke Speelberg, associate curator in the department of drawings and prints at The Metropolitan Museum of Art in New York.

“As a source of inspiration, the relationship between decor and nature has always been very important,” she says.

Today, as we lose biodiversity, botanical drawing is also an important way to examine and document plants that might not always be there, says Helen Bynum, who with her husband, William Bynum, compiled “Botanical Sketchbooks” (Princeton Architectural Press, 2017), a compendium of botanical illustrations by 80 artists from around the world.

“Being a sketcher of whatever ability makes you really engage with what you are looking at it,” says Bynum.

Botanical drawing dates back to at least to the times of the Pharaohs. It was particularly developed in the Middle Ages, when plants were often used for medicinal purposes and people needed to be able to tell safe from poisonous plants. A lot of plant families contain both. For instance, the nightshade family of plants includes Belladonna, a poisonous plant, and also edibles like tomatoes, peppers and eggplants.

Explorers often brought a botanical artist along to record the plants encountered. During “Tulip Mania” in 17th century Holland, when rare bulbs sold for the equivalent of an average person’s annual salary, it was crucial for collectors and breeders to record each flower’s unique patterns and contours.

And botanical art can be about more than accuracy.

Often, the story a botanical illustration tells is more mesmerizing than the perfection of the drawing itself, says Bynum.

“What I learned doing this book is that you don’t have to be a great artist to get things down on paper in a way that can communicate to other people,” she says.

Robin Jess runs the Botanical Art and Illustration program at the New York Botanical Garden, the oldest certificate program in the subject in the country.

“We tend to be very accurate, and to pay attention to all the details. We require that students take classes in plant morphology, so they understand what it is exactly that they are drawing. It requires a strong basis in botany,” she explains.

The garden is also the headquarters of the American Society of Botanical Artists, with about 1,800 members.

“Contemporary botanical artists share a concern for the environment, particularly in light of climate change, as well as for drawing attention to plants,” Jess explains.

Before photography was invented, botanical illustrations were essential to understanding plants. But today, too, drawings can illuminate aspects of plants in a way photos cannot.

“An illustration can show various parts of a plant at the same time, something a photo really can’t. It can show extra details of the fruit, for example, and what it looks like bisected,” Jess explains.

And making botanical illustrations for a patron is alive and well, she points out. Florilegia — documentation of all the plants growing in a specific garden — is a big thing right now, she says.

“From a florilegium of a small herb garden in Minneapolis to a complete florilegium of Alcatraz, they’re really drawing a lot of attention,” Jess says.

Prince Charles recently commissioned a florilegium of one of his properties, she says. He invited top botanical artists from around the world to come to his property and paint. The resulting work, says Jess, is “just fabulous.”