Co-CEOs may prove no match for ice zombies 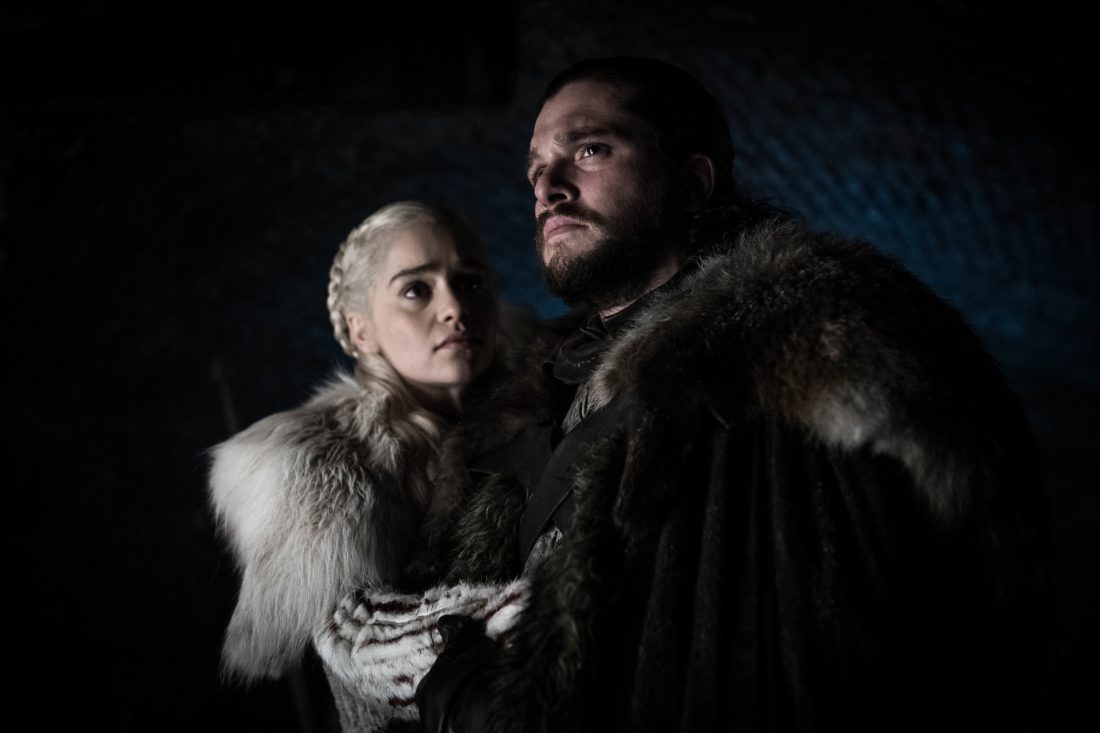 This image released by HBO shows Emilia Clarke and Kit Harington in a scene from "Game of Thrones," that aired Sunday, April 21, 2019. With the Game of Thrones' Jon Snow revealing his royal lineage to his potential rival Daenerys Targaryen, the beleaguered army at Winterfell is about to find out if two chief executives better than one. (Helen Sloan/HBO via AP)

WASHINGTON (AP) — Are two chief executives better than one? With Game of Thrones’ Jon Snow revealing his royal lineage to his lover — and aunt — and potential rival Daenerys Targaryen during Sunday’s episode, their beleaguered army at Winterfell is about to find out.

Daenerys is a Queen, among her many titles, and currently the only formal leader of the motley army preparing to face down the fearsome White Walkers. But Jon, who spent most of the show’s seven seasons as the brooding illegitimate son of Ned Stark, reveals that his actual father was her older brother, Prince Rhaegar Targaryen. That gives Jon an arguably stronger claim to the Iron Throne than Daenerys.

His timing wasn’t great: Their army will now enter an apocalyptic battle with two potential leaders. And Jon’s sister Sansa Stark has exerted her own authority, making the leadership structure even more complicated.

In the Associated Press’ weekly “Wealth of Westeros” series , we’re following the HBO fantasy show’s latest plot twists and analyzing the economic and business forces driving the story. This week, the conflicts over leadership at the top inspired us to ask: How have two (or more) leaders worked out in the business world?

To begin with, it hasn’t been a very common arrangement. Barely 5% of the Fortune 500 have tried it over the past 30 years, including Oracle, Salesforce, Chipotle and Whole Foods.

There have been spectacular flame-outs, such as at Deutsche Bank, where both co-CEOs resigned at the same time in 2015. John Reed, the CEO of Citicorp in the late 1990s, was outmaneuvered and pushed aside by his co-chairman, Sanford Weill, after Citicorp merged with Travelers Group in 1998 to form Citigroup. Whole Foods co-CEO Walter Robb eventually stepped aside in 2016, to make room for co-founder John Mackey to take over as the sole CEO.

All those examples are considered failures, which may not be surprising, considering that most leadership roles are typically filled by one person, to avoid confusion and in-fighting. And the outsize ambition that is usually required to become a leader in the first place doesn’t leave much room for humility and cooperation.

“My experience is that co-leadership doesn’t work,” Jeffrey Sonnenfeld, a management expert at Yale University, wrote earlier this month. “As a general rule, doling out chieftainships across an organization’s upper echelons only serves to undermine and dilute the leadership role.”

Still, co-CEOs have prospered in some cases. Mark Hurd and Safra Katz have been co-CEOs of software giant Oracle since 2014, a partnership that has benefited the company. Still, Oracle’s founder, Larry Ellison, remains at the firm as executive chairman, an arrangement that suggests he may still be the ultimate authority.

And some research has sought to figure out when sharing power can work. A 2014 paper by Ryan Krause, a management professor at Texas Christian University, and two colleagues, studied 71 publicly traded firms led by co-CEOs. They found that the arrangement could increase a company’s efficiency, but only if they were not actually sharing power. Instead, one partner had to be more powerful than the other.

David Heenan, a visiting professor at Georgetown University who has studied leadership, has reached a similar conclusion.

“The most productive relationships … are those of a leader and a chief ally,” he wrote in the Harvard Business Review in 2013. “They may seem like buddies, even peers — but they remain committed to the principle of one-voice or single-command.”

Assuming they all survive the zombie apocalypse, could John and Dany govern as equals, at least in public? If so, who would wield the real power, and who would be “chief ally”?

And we know that there’s no confusion about the White Walker chain of command: There’s one Night King whose rule reigns supreme.