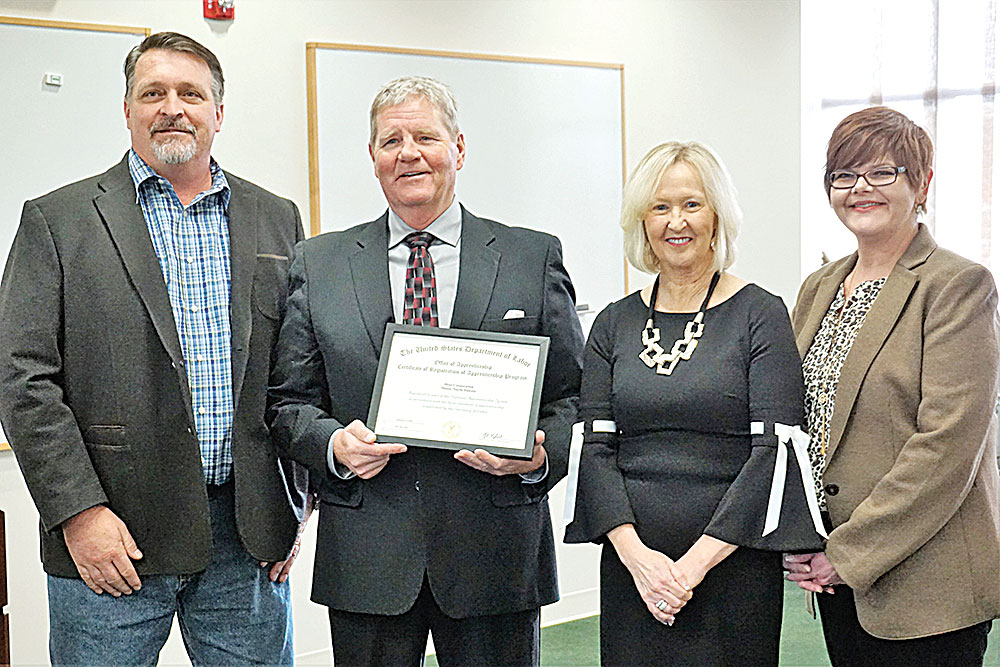 An apprenticeship program created last year to fill a need for workers in the Bakken was recognized by the U.S. Department of Labor Tuesday in Minot.

Barry Dutton, state director of the U.S. Department of Labor’s Office of Apprenticeship, presented an official “Registered Apprenticeship Program” certificate to Hess Corp. for its Job Experience Training program. JET provides rigorous on-the-job training related to operations in the oil and gas industry, along with classroom training at Bismarck State College. JET is the first registered apprenticeship program with a set of program standards in North Dakota’s oil and gas industry.

“Hess has gone out of the way to develop an outstanding training program, which I think will go a long way in the oil and gas field and in workforce development in general,” Dutton said.

“It’s an honor for us to be recognized by the Department of Labor,” said Brent Lohnes, Hess general manager in North Dakota. “This aligns very well with the governor’s initiative on workforce development. We are just really looking forward to having a very positive impact on the industry as a whole with this program.”

At a news conference Tuesday at which the certificate was presented, Julie Vetter, manager of competency and training for Hess’ North Dakota assets, thanked the labor department for its guidance and Hess leadership for support during the past year’s effort toward achieving registration.

Two trainers provide classroom and on-the-job coaching in the two-year JET program, but apprentices also work alongside mentors, who are Hess employees identified as high performers.

Hess finds when apprentices take their final assessments, they are ahead of workers who have been with the company for two to four years but haven’t gone through apprenticeships, Vetter said.

“They are getting that hands-on, individualized time with a mentor, and that is really making all the difference,” she said.

Rachel Allison, competency and training supervisor for the Hess’ Bakken assets and JET program manager, said the JET program started in 2017 with four apprentices. Hess discovered the program can develop worker skills in half the time it typically takes to train a new employee, she said.

“On average, it was taking about a year for an off-the-street hire to come up to speed and be fully safe and efficient out there as reliability operator and through the apprenticeship program, we were able to do that within six months. So that was a huge achievement for us as a company and it just led to more and more traction of this overall program,” Allison said.

Hess currently has 14 apprentices training as reliability operators. It hopes to bring in 21 additional participants over the course of 2019.

Allison said Hess is actively recruiting former military personnel and high school students with the right background and aptitude. BSC will continue to be the primary classroom education provider because of its world-class program, she said.

In 2019, Hess is expanding the two-year program to give participants extra time with their mentors. Allison said. Hess also looks to expand the program to other work positions in addition to reliability operators.

“This is really an opportunity for anybody in North Dakota who is interested in learning a skilled trade,” Allison said.

Vetter said the program has three components. The first is a job shadow opportunity that is ideal for middle school through college students who want to learn more about the jobs available in the industry.

The second component is an eight- to 10-week, paid internship. If the internship proves to be a good fit, an intern can apply for an apprenticeship, which also is paid.

Richard Carroll Trainor has updated his registration information with the Minot Police Department as a sexual ...

Jayden Groninger, Burlington, given deferred sentence, probation, for delivery of heroin to man who later overdosed

Jayden Gene Groninger, 27, Burlington, received a deferred imposition of sentence for three years on Tuesday for ...

James Edward Floyd, 34, is charged with Class C felony aggravated assault for beating up another inmate during a ...

ROLLA – A man facing several felony charges, including murder, made an appearance in Northeast District Court in ...