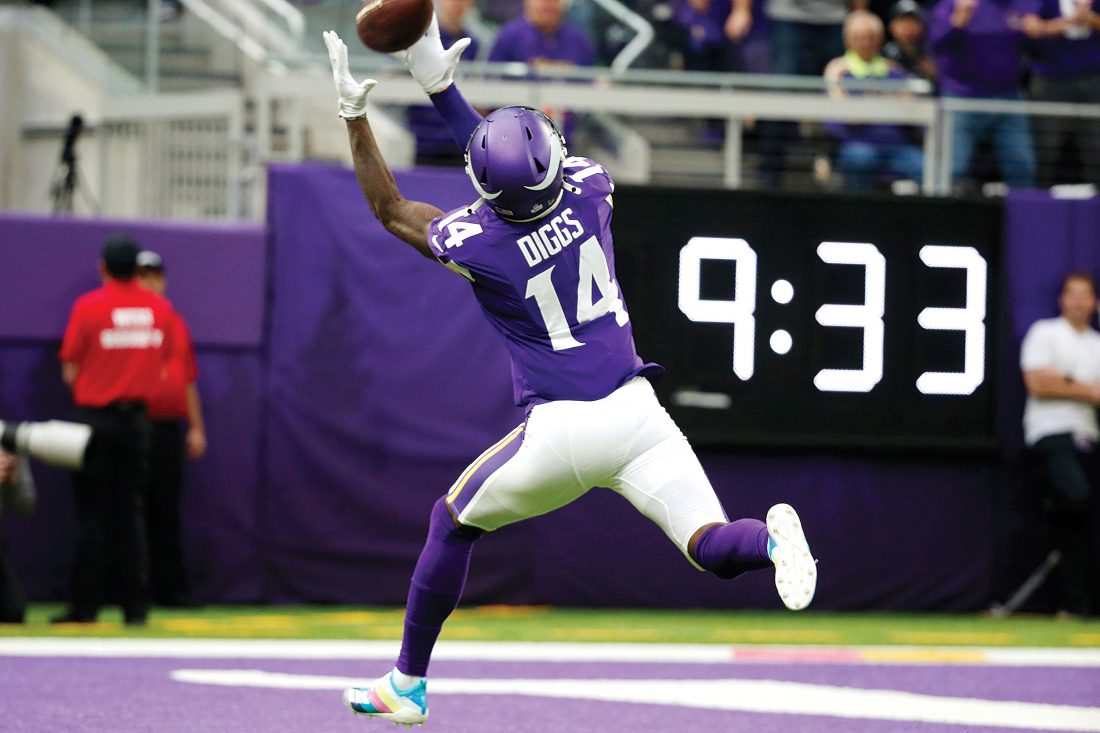 AP Photo Minnesota Vikings wide receiver Stefon Diggs catches a 51-yard touchdown pass during the first half of an NFL football game against the Philadelphia Eagles, Sunday in Minneapolis.

MINNEAPOLIS (AP) — Two weeks ago, Stefon Diggs was a dissatisfied star with a decreasing role for a Minnesota team in a mini-crisis on the passing attack.

Patience was all Diggs needed, as it turned out, to re-establish himself as a prominent receiver for Kirk Cousins and the Vikings.

Cousins threw to Diggs for three of his four touchdowns, racking up a season-high 333 passing yards as the Vikings ravaged the Philadelphia Eagles secondary in a 38-20 victory Sunday.

“You never really know how it’s going to come out, because you never know what defense you’re going to get and what adjustments they’re going to make, but as far as like starting fast early, it’s always a big thing because you want to hit the ground running,” said Diggs, who had 167 yards on seven catches.

Diggs scored on first-half passes that covered 51 and 62 yards, becoming the first player since Randy Moss in 2000 to post two touchdown receptions of 50-plus yards in one game for the Vikings (4-2).

“You play the game that’s called,” Cousins said, “and today it was an aggressive one.”

Diggs’ most important catch came late in the third quarter, a double toe tap in the back of the end zone from 11 yards out that pushed the lead to 11 points after Carson Wentz and the Eagles (3-3) had pulled within 24-20 with 17 straight points.

The Vikings became the first team to hit the 100-yard rushing mark in the last nine games against the Eagles, who also surrendered 300-plus passing yards for the fourth time in six games. The danger presented by Dalvin Cook in the backfield and the success of Cousins at selling fakes created a wealth of play-action completions.

“They run the ball, play action, and throw the ball deep,” Douglas said. “That’s just what they always do.”

Cousins went 22 for 29 with one sack and one interception that was, oddly enough, Diggs’ fault when a sideline throw hit him in the hands, bounced off his helmet and into the air behind him for former Vikings safety Andrew Sendejo to pick off late in the second quarter.

The sign that this was not the Eagles’ day came right after that, when a fake field goal from the 21 failed with 20 seconds left. The snap to Jake Elliott left the kicker with only one receiver, well-covered tight end Dallas Goedert, and the desperation throw was tipped by Anthony Harris and intercepted by Everson Griffen.

“We had the look we wanted, tried to take advantage of it, get an opportunity to maybe shoot it in the end zone after that,” Eagles coach Doug Pederson said. “They made a great play.”

The Eagles have been badly missing starting cornerbacks Ronald Darby and Avonte Maddox, and Cousins took full advantage. Adam Thielen made a slick double move to beat Sidney Jones for a textbook fade throw by Cousins for a 7-yard touchdown to cap the opening drive. Diggs blew by Rasul Douglas on a post route in the second quarter to put the Vikings up 17-3.

Diggs beat Douglas again on the first snap of their next possession for the second of his career-best three scores, after Douglas began the play like he was settling into zone coverage and Eagles safety Malcolm Jenkins missed his assignment over the top. Even with a 32-yard touchdown pass by Wentz to running back Miles Sanders before the break, the Vikings pushed their first-half scoring advantage in three home games this year to 66-17.

Diggs famously made the “Minneapolis Miracle” catch to win a playoff game two years ago for the Vikings, then followed that big moment with his first 1,000-yard season in 2018, but after being targeted an average of 10 times per game last year, he had a quiet start to 2019.

Following an ugly performance two weeks ago in defeat at Chicago that had the passing game out of sorts, Diggs skipped some team activities, drew more than $200,000 in fines and acknowledged unspecified dissatisfaction with the direction of the offense while speaking cryptically about his desire to be with the Vikings.

Since then, the Vikings have won twice by a combined score of 66-30.

“We’ve got guys that can light this thing up,” Cook said, adding: “We give him opportunities to do what he do, he’s going to be Kirk.”

Wentz finished 26 for 40 for 306 yards, two touchdowns and one interception. After the last score by Diggs, the Eagles wilted under the weight of the Vikings pass rush and the crowd noise at U.S. Bank Stadium, where they left as first-time Super Bowl champions following their last visit two seasons ago.

Eric Kendricks and Mackensie Alexander shared a third-down sack after an all-out blitz called by Vikings coach Mike Zimmer forced a punt. Anthony Barr recovered a fumble by Zach Ertz to end the next drive at midfield. Alexander picked off Wentz on the following possession.

“I’m sure there was a lot of doubt in the stadium, because they’re a very explosive team,” Zimmer said.

Vikings: LT Riley Reiff (ankle) left in the first quarter, returned briefly, then was sidelined in the second half and replaced by Rashod Hill.

Eagles: Play at Dallas next Sunday.

Vikings: Play at Detroit next Sunday.

BERLIN (AP) — Leipzig seemed to enjoy playing in an empty stadium with no protesters as it routed host Mainz 5-0 ...

PARIS (AP) — Tennis, anyone? Not Sunday at the French Open. Nobody was there. Maybe they will be in ...

CHICAGO (AP) — Growing up in a rough part of Chicago’s South Side, Saint Wilkins figured he was headed for a ...