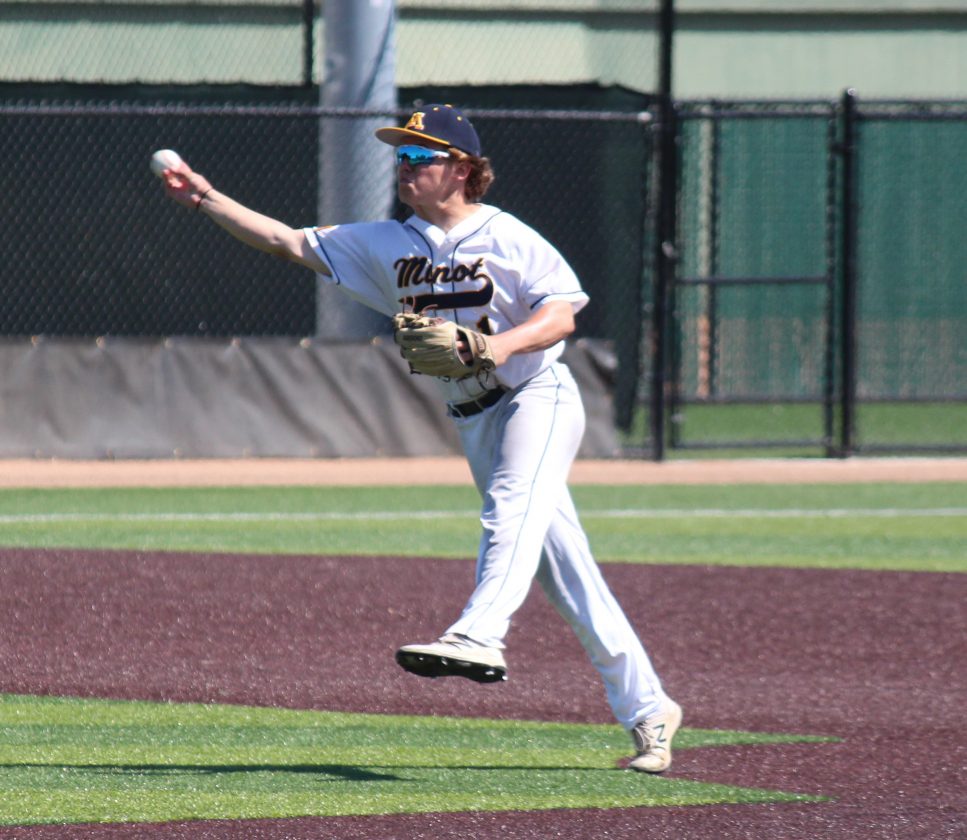 The rain kept coming, and it wouldn’t stop coming.

After waiting roughly two hours, the decision came at 8:40 p.m. Saturday to cancel the Minot Vistas last pool-play game against East Grand Forks due to the ongoing thunderstorm passing through Corbett Field.

The cancellation ended the Vistas’ chance to at least salvage a victory in their fourth annual Heilman’s Performance Tournament in Minot.

Instead, after a 6-3 loss earlier on Saturday to Pierre Post 8, the rain-drenched Vistas departed Corbett Field without a win on the weekend.

“We need to communicate more with each other to figure out what we don’t know as a team,” Vistas head coach Pat Arntson said. “We are obviously frustrated with how we have played. But we keep telling the players that as long as the effort is there, we aren’t going to be worried about the other stuff. We want to play well. If our kids are trying and it’s just not going well, we can’t keep beating them up on that. Our team is still relatively young and we have only played 15 games. We are still trying to figure out who we are.”

The Vistas’ only offense against Pierre came in the fifth inning. Trailing 4-0, Minot was gifted two runs on a throwing error, and Jack Plemel drilled an RBI triple over the head of center fielder Jack Van Camp.

The Vistas were in trouble right from the get-go. Much to the dismay of starting pitcher Derek Nygaard, Minot let two Pierre runners reach base due to errors in the infield within the game’s first five pitches.

Leif pitched a 1-2-3 bottom of the seventh inning to close out a 6-3 win for Pierre Post 8. That moved them to 2-2 overall for the tournament.

Minot dropped to 0-3 with no chance to play in the championship game.

“We are going to keep searching for that recipe that pushes us forward,” Arntson said. “We have played really well. I mean, we beat (Fargo) Post 2 here, and a bad team doesn’t do that. So, we have seen it.”

Following the Vistas defeat to Pierre, East Grand Forks rallied with a seven-run fifth inning and added three more runs in the sixth to beat the Bismarck Governors, 10-7.

Then, between games, there was a lightning strike in the distance. Heavy rain followed soon after.

Minot and East Grand Forks watched and waited, hoping the weather would clear up so they could get in the tournament’s last pool-play game.

But, to no avail. The contest was eventually canceled.

“We weren’t given the green light by 9 p.m. to start warming up,” Arntson said. “There was another close lightning strike before that, and it wasn’t moving. So, we weren’t going to get this game in at a decent time. We talked about moving it to tomorrow, but Bismarck needed like a four-hour heads up to drive the two hours from Bismarck and then get ready to play again.”

Due to those strenuous travel accommodations and pending issues of having to wait on the outcome of that extra game before the championship, the Bismarck Governors decided to back out and allowed East Grand Forks to advance straight to the tournament title game.

“Bismarck (given the head-to-head result against EGF) was content with not driving back to Minot and not having to wait around tomorrow,” Arntson said. “Everybody knew we had to make a decision, instead of just having these kids sit here for a long time.”

As such, East Grand Forks will face Mandan at noon this afternoon in the Heilman’s Performance Tournament championship game at Corbett Field.