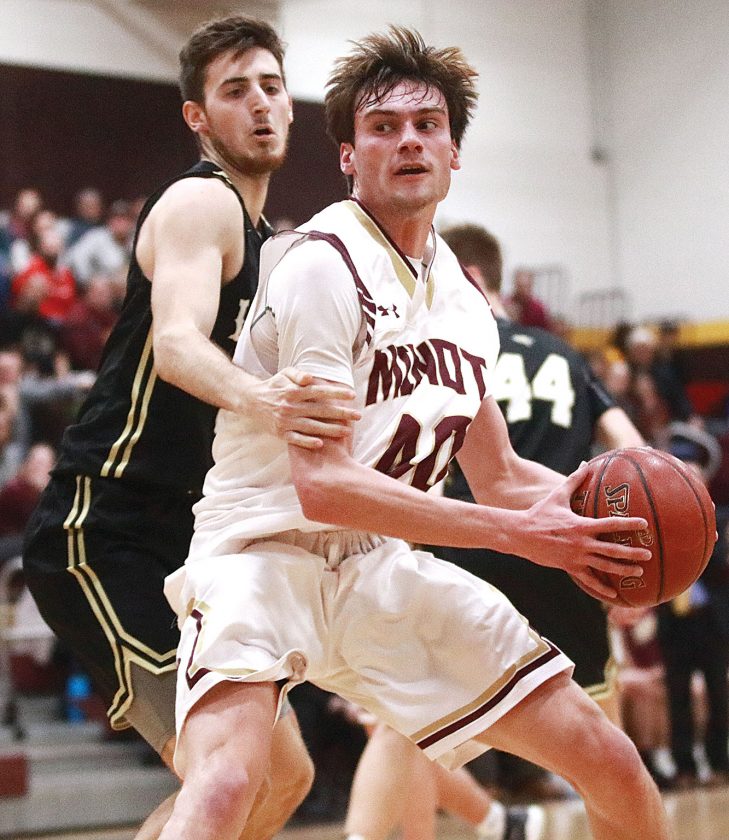 Jimmy Lafakis/MDN Minot senior center Easton Larson (white) maneuvers around Legacy senior forward Jace Nordsven (black) during the first half of Tuesday's Class A game in Minot. The Sabers captured a 67-66 victory over the Magicians.

When the high school sports calendar flips to February, WDA action kicks up a notch.

Tuesday’s Class A boys basketball contest between Minot High (12-5, 11-5 WDA) and Legacy (11-7, 10-7 WDA) came down to the last second. When the dust settled, the Sabers’ final defensive stands led to their 67-66 victory over the Magicians.

“We have to do a better job of prepping our kids,” Minot head coach Dean Winczewski said. “That’s on me as a coach, and it’s on them as a team to make sure that we do what we need to.”

Minot jumped out to an early 11-4 lead. Once the Sabers found their rhythm from the outside, the game’s momentum pendulum shifted.

After Legacy earned the lead, Minot senior guard Jaxon Gunville gave the Magi a boost with a last-second 3-pointer before halftime. Gunville’s shot pushed the score to 30-30, and the second half became even more of a dogfight.

“On a night like tonight where not all the shots are falling, we need to do the little things,” Minot senior guard Johnny Butz said. “Boxing out, guarding the ball, keeping our hands up. All those little things. They kill us at the end. If we miss a box, they get a putback and that’s how the game goes.”

Back and forth it went. When the Magi made their moves, Legacy responded with the answers.

“I think we needed to feed (Larson) down low more,” Butz said. “We need to get our posts touches. We got him going. We just need to get him the ball more.”

The Sabers clawed back into the lead. Buoyed by junior guard Keagen Woodbury and senior forward Rhett Clements, Legacy completed the necessary tasks on both ends of the floor.

Minot’s late 3-point attempts couldn’t find the bottom of the net, and the Sabers’ bench stormed the floor in celebration.

“We had opportunities tonight against a good basketball team,” Winczewski said. “We didn’t take advantage of them.”

The Sabers showed grit on the glass. Legacy tallied a 26-18 rebounding advantage over Minot.

Now that their two-game homestand has concluded, the Magi will travel to Jamestown for a 7 p.m. game on Friday. Back on Dec. 28, Minot defeated the Blue Jays 71-64.