Navrot siblings watching each other flourish while with Minot State hockey 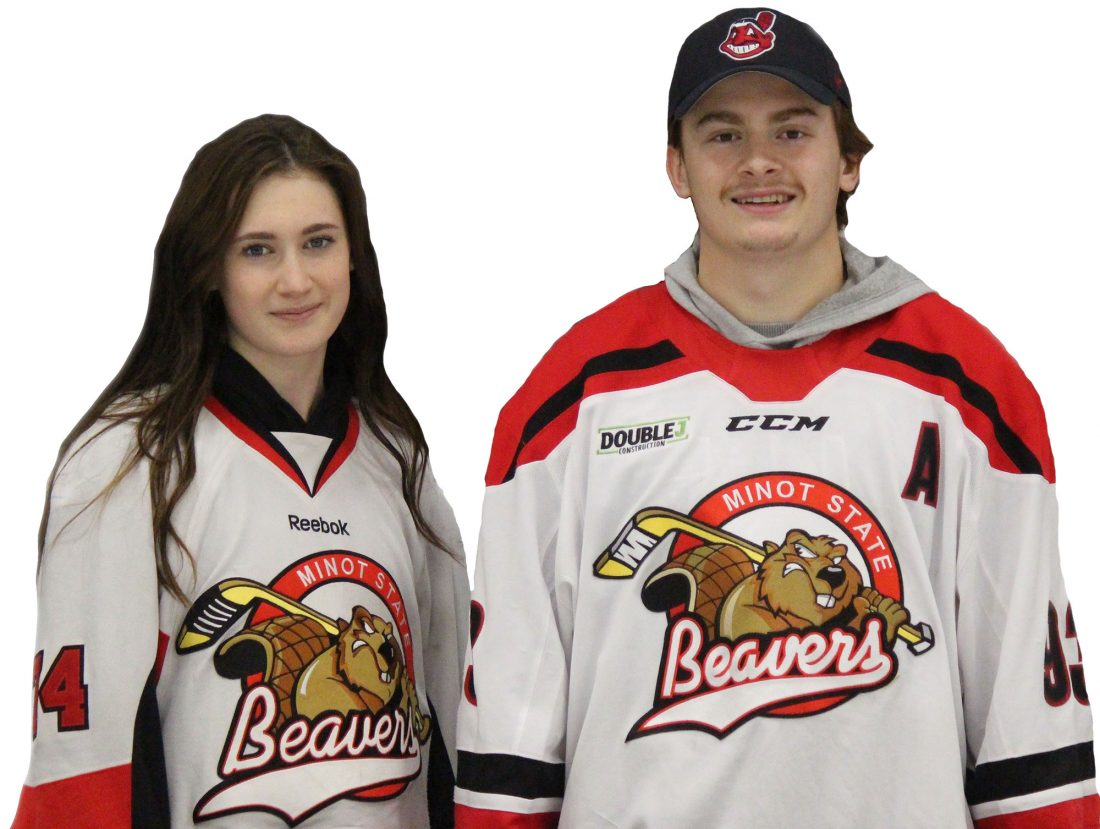 Connor and Story Navrot have rarely shared ice time. The brother and sister pairing observes the action instead.

The Minot State hockey siblings have continued the trend of watching over each other this season at Maysa Arena.

“We have probably only stepped on the ice together like seven times in our lives,” Connor said. “It doesn’t happen much. She has always watched me play, and I have always watched her play. I think it’s the age difference since I am four years older than her.”

Story added: “We never really played together on a real ice surface. It was mostly on outdoor rinks with him and his buddies. I’d just be little out there trying to keep up with them.”

Connor, a 22-year-old sophomore forward, is an assistant captain for the MSU men’s hockey team.

Story, an 18-year-old freshman forward, is one of the many new faces on the MSU women’s hockey team.

Before pulling on Beavers’ sweaters, both of them grew up in the small Canadian city of Martensville, Saskatchewan, located five miles north of Saskatoon, with their older brother Morgan Navrot.

Hockey was introduced to the trio at a young age by their law enforcing parents Spade and Heather Navrot.

“They are both city police officers for the Saskatoon police force,” Connor said. “Much respect to them for the job they do. It takes a lot out of you to be a police officer, especially when you have three kids at home. So, I love them for that.”

Morgan took to the ice first, then Connor and Story followed suit.

“I basically started playing hockey because of my older brothers,” Story said. “They were really big role models for me.”

But, contrary to the stereotype, living and breathing hockey while growing up in Canada isn’t enough to guarantee a professional contract.

“I originally said I was done playing hockey,” Connor said. “Then, (Minot State) head coach Wade Regier gave me a call one day and told me about their program.”

Regier was almost denied the chance to make that fateful phone call.

“We had him targeted high on our list, and the process of recruiting is always going through the organization or the coach that they are currently playing under,” Regier explained. “Well, the coach never responded. I left a couple of messages; never responded. It was at the point where I was getting ready to creep him out on social media like, ‘Sorry, I’m Facebooking you or sending a Twitter message, but your coach just won’t get back to me.'”

Regier’s persistence eventually paid off, and he finally got Connor’s phone number from the head coach, but it was much later in the recruiting process than he would have liked.

“I called him, and I was kind of apologetic like, ‘Hey, I’m not just sitting here and thinking you are on the bottom of my list. I’ve been trying to get a hold of you,'” Regier said.

A visit to tour the campus was scheduled over the summer of 2018 and shortly after — following some hard-hitting questions from his parents about schooling cost and potential degree options — Connor committed to Minot State.

Regier had brought in precisely the type of player he desires.

“I want that blue-collar, bring your lunch pal type of players,” he said. “And that’s who he was last year. He scored a lot of really nice goals, but he also scored some goals by just getting to the front of the net. I love those types of players because when you get to the national tournament, sometimes those are the only goals that go in.”

As Connor lifted the Murdoch Cup for winning the 2019 ACHA Division I National Championship this past March in Frisco, Texas, Story was watching from home in Canada with family and friends.

“We had a big group of people over,” Story said. “We were all watching the game and cheering him on.”

Crafting her own legacy, Story made her commitment to the MSU women’s team. But before exploring her journey to Minot State, a quick media timeout for a brief backstory on her unique name.

“My mom was watching the news one day and it was talking about this princess who lived in a castle,” Story said. “The girl who was doing the news report was named Story. My parents just really liked the name.”

Connor continued: “Yeah, (Connor) is a pretty average name. I didn’t get a cool name like Story. But, I live with it.”

Joking (and name puns) aside, Story already had Minot State on her radar — because of Connor — before Ryan Miner, the MSU women’s hockey head coach, scouted her for the first time at a showcase event in his hometown of Winnipeg.

“She was playing on a weaker team, but she stood out from the rest of her teammates,” Miner said. “That helped me identify her. Even when she was playing against a strong team, she still competed against those players, if not outperformed them.”

Story came down to Minot to watch Connor play a few times, got a tour of the campus and saw the women’s team in action as well.

She was sold, and MSU hockey had gained another pair of siblings.

“If you look back, there are the Lipinski brothers and the Fournier brothers on the men’s teams,” Miner said. “Having family here is huge. The family doesn’t have to travel twice. They can come down the same weekend and see both of them if we are both playing. It for sure made an impact on her decision. Obviously, Connor was enjoying himself here with a national title and I think that just added to it.”

Connor took a victory lap in Slovakia over the summer, earning a third-place result with Team Canada in the International Street and Ball Hockey Federation (ISBHF) World Championships.

A lingering shoulder injury sidelined Connor for a handful of MSU games near the start of this season. But he has since returned to the Beavers’ lineup with an assistant captain ‘A’ on his chest.

“He was itching to get back in,” Regier said. “It’s a don’t want to miss out mentality. That’s him being a leader. Sometimes when guys are injured they’re like, ‘Poor old me.’ With him, he was going to do whatever it took to get back into the lineup. Even if that meant going to the training room every single day.”

Connor has been held to two points (one goal and one assist) in seven games played so far this season. His presence has been felt more in the locker room, and that’s how the sophomore earned assistant captain honors.

“He never gets mad, he is always positive and doesn’t get upset when he doesn’t get to dress,” Regier said. “Works hard and a great kid in the locker room.”

Down the hallway at Maysa Arena in the newly-constructed locker room for the Minot State women’s hockey team, Story and nine other freshmen have given the women’s team a new identity.

The influx of youth has provided depth Miner hasn’t had before, and turned the Beavers — two-time ACHA Division II runner-ups — into a legitimate national championship contender in their first season at the ACHA Division I level.

The scary part of the rest of the league is that many of these newcomers still have a ways to go before reaching their full potential, including Story.

“She is still kind of finding herself,” Miner said about Story, who has three goals and three assists in 10 ACHA games this season. “Every shift she is out there, she is working hard. But I know there is a little more in her. There is a little more push that I think she has. I have a feeling that pretty soon we are going to see her step into her role and start producing more.”

As both Navrots continue to develop in the pursuit of possible national titles — the MSU men (14-1-2) are ranked No. 2 nationally and the MSU women (7-3-0) are ranked No. 4 nationally — the siblings will have plenty of family support in the stands.

Even on the off-chance their parents can’t come down to Minot for a doubleheader weekend, Connor and Story still have each other.

“I have always been watching over my sister from Day 1, especially with hockey,” Connor said. “I have seen her improve not just as a player but as a person outside of it. She is very mature for her age. I’m looking forward to seeing her grow even more.”