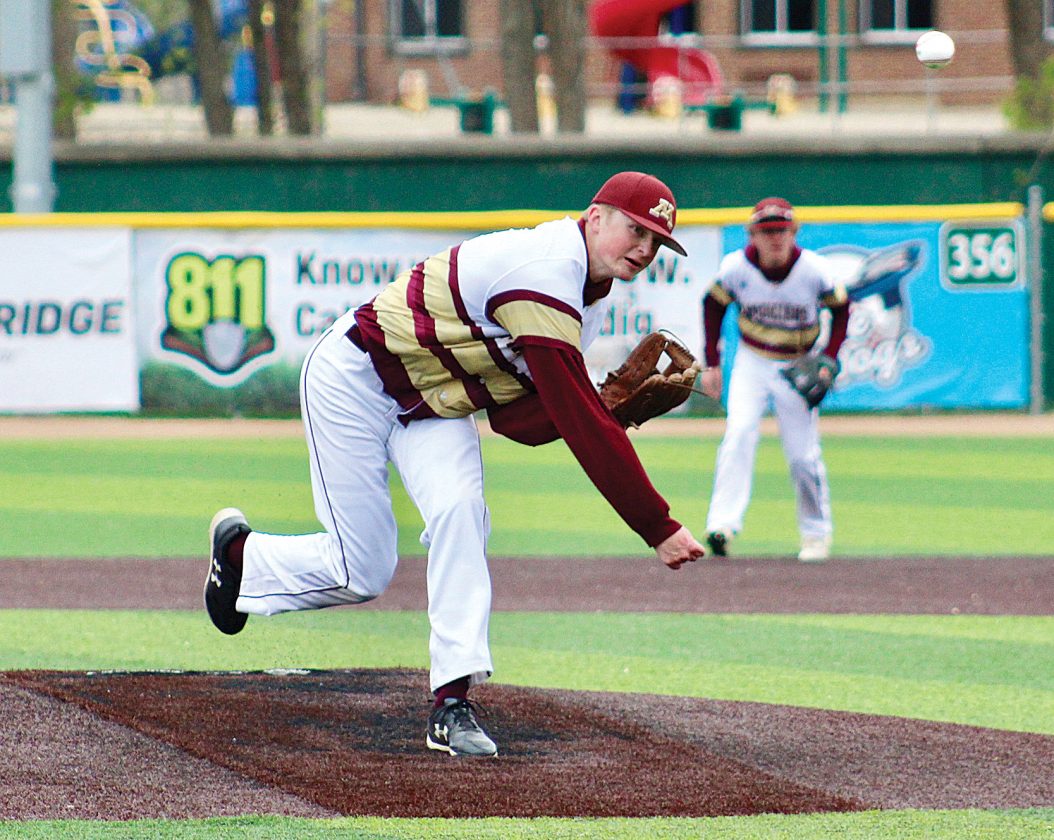 When pursuing his goals, Alex Schimke looks at things one way.

It’s a simple mantra to remember, but actually following it is another conversation. There are tough decisions. There are sacrifices. There are changes.

Schimke knows this, but his mindset is still the same.

The Minot High School senior is on the move. His destination is Longview, Washington — a town 1,300 miles away from home with a population of roughly 40,000 people. His reason for the move is baseball.

Schimke, who has been a staple in the Magicians’ baseball program for the past few years, originally began getting interest from college schools in the summer of 2018 following the conclusion of his junior season. At the time, Lower Columbia wasn’t even in the picture.

But that changed early this spring when the program got in contact with him. Soon after, he and his family made the trip to Washington to tour the campus. It didn’t take long for the shortstop to fall in love with it all.

“It all happened pretty quick,” Schimke said. “But I talked to the coaches and liked them a lot. I visited the campus in Easter and just told my dad that this is the place where I wanted to be.”

Still, the distance from home was daunting. Admittedly, the senior claims to not be very good with change.

But the opportunity was too good to pass up. On May 2, Schimke announced his commitment to play for the Red Devils.

“I just felt that moving away for baseball would be for the best because we don’t get a lot of baseball up here since it gets to like negative 16 degrees in the winter,” Schimke said. “That was the hardest decision for me was knowing I had to move away. But you do what you gotta do. I’m looking forward to it, and I think it’ll be really cool.”

From playing tee-ball as a kid to idolizing greats on the Minnesota Twins, Schimke has alway been infatuated with the sport for as long as he can remember.

Despite this, Schimke has still pursued other sports growing up. The multi-talented athlete also made a name for himself on the hardwood, as he became a lethal scoring option for the Minot High School basketball team.

The 6-foot-2 guard was the stuff of nightmares for his opponents during his time with the Magi due in part to his signature stepback 3-pointers that would bring the crowd to its feet while simultaneously knocking the defender off his feet.

Schimke averaged 15 points and 1.4 blocks in his senior season and was selected to the Class A Boys Basketball All-State Second Team in the process.

But the accolades on the hardwood weren’t enough to steer Schimke from his intended path. He wanted to play college baseball.

“Ever since my parents and I started talking about the possibility of me playing in college it’s been baseball,” Schimke said. “I just think I’ve always liked it more (than basketball). College baseball just seems more fun to me, so I’ve been pursuing it ever since.”

In all fairness, the kid is pretty good at baseball too.

Schimke has been one of the Magi’s most consistent options at the plate this season, going 38-for-81 (.469 batting average) and racking up 29 runs and 15 RBIs in the process. He also has three home runs to his name – the most recent of which came during Minot’s Senior Night on Friday in an 11-1 win over Dickinson.

In addition to his hitting proficiency, Schimke is also the Magi’s best bet at the mound. The senior boasts a 5-2 record and averages three strikeouts per outing.

“(Schimke) has worked really hard in order to grow into the player that he is right now,” MHS head coach Pete Stenberg said. “He does a great job at the shortstop position, and he swings a really good bat… I think he’s going to be a nice addition for (Lower Columbia).”

Few people are as qualified to speak on Schimke’s baseball skills as much as Stenberg, who is a long-time family friend.

Stenberg has been coaching Schimke since the future Minot standout was a member of the Cal Ripken league, a category of Magic City Youth Baseball for kids ages 9-12. Since then, Stenberg has watched Schimke grow into not only a stellar baseball player but a proven leader as well.

“Alex (Schimke) does things right,” Stenberg said. “He carries himself properly, and he’s a good leader. Whether it’s on the field or the court, he’s competing all the time. That’s what you want out of your older players.”

It’s people like Stenberg and the rest of his teammates that Schimke will miss when the time comes for him to pack up his things and move to Washington this summer. That day will be tough. But, for Schimke, you do what you gotta do.

Before that day comes, though, he has some unfinished business.

With the regular season in the books, Schimke is set to begin his final postseason with the Magi on Thursday when No. 6-seeded Minot faces No. 3-seeded Dickinson in the quarterfinals of the West Region tournament in Bismarck.

It’ll be one last ride for the senior that’s so proudly represented maroon and gold over the years, and it’s one he hopes will take the scenic route.

“It would mean a lot to have a long (postseason) run,” Schimke said. “We have the guys to do it, and we’re starting to play well. I’m looking forward to what we can do in the postseason.”