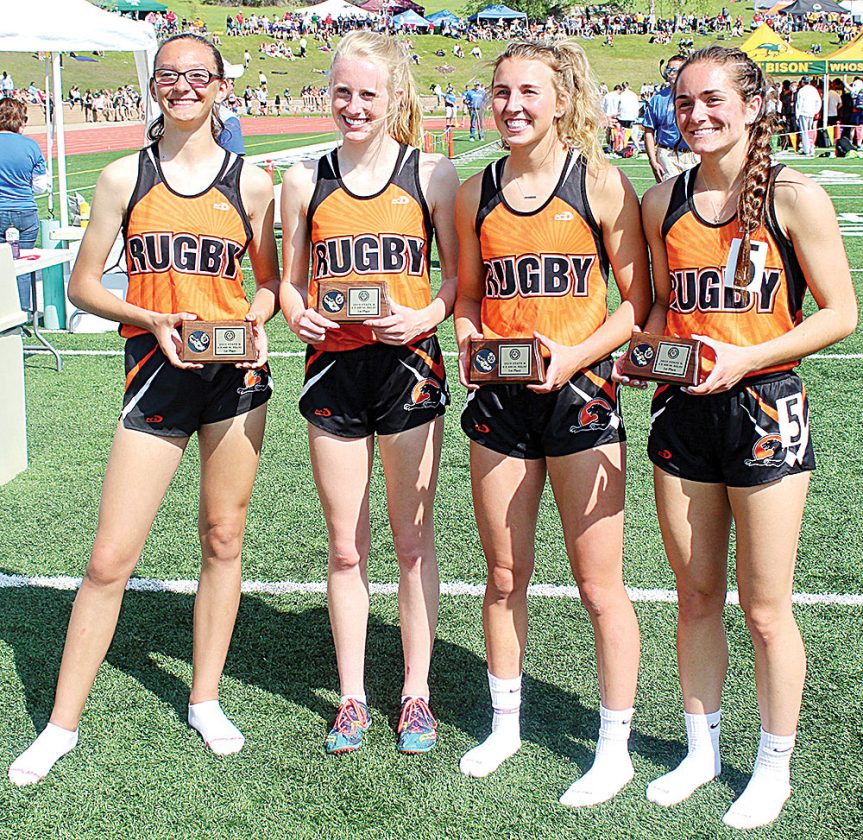 Justin Martinez/MDN Rugby’s Emily Mattern, Ellie Duchscherer, Maria Blessum and Anni Stier (From left to right) hold up their plaques after a first-place finish in the 4x400 meter relay on Saturday in the state track & field meet at the MDU Resources Community Bowl.

BISMARCK — Anni Stier didn’t even want to look at the big screen. She only had her eyes on the finish line.

Just 100 meters separated the Rugby senior from a victory of epic proportions, as she raced down the home stretch on Saturday in the 4×400 meter relay at the state track & field meet. Fellow senior Maria Blessum had blessed Stier with a sizable lead on the prior lap, and now it was up to her to seal the deal.

The nerves were uncontrollable.

“I didn’t look back or at the screen or anything,” Stier said. “Honestly I was scared the whole time and thinking, ‘Someone is gaining on me.’ I was just trying my hardest to finish.”

In reality, nobody was within a stone’s throw of Stier. But that didn’t ease her mind. 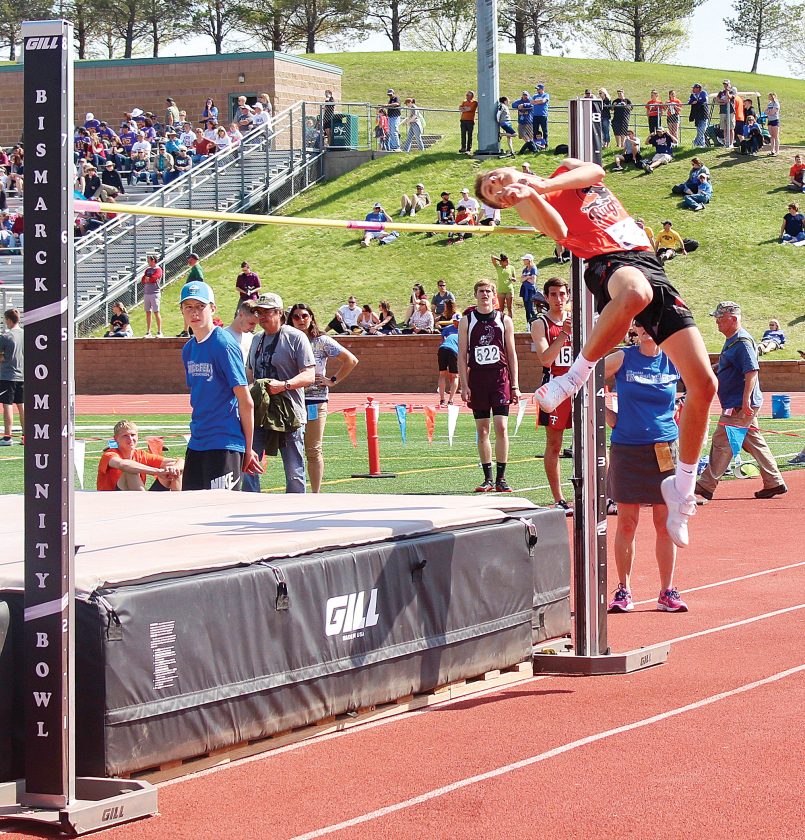 Justin Martinez/MDN Rugby junior Jaden Hamilton elevates for an attempt at the high jump on Saturday in the state track & field meet at the MDU Resources Community Bowl.

The senior still pumped her arms back and forth even faster as she neared the finish line. The crowd, sensing the impending victory, rose to its feet and started to applaud.

Stier spread her arms wide as she crossed the finish line and let out a massive sigh of relief in the process. Her teammates, still gasping for air themselves, swarmed her in celebration.

Blessum was the first to reach her, and the two embraced as tears of joy fell from their faces. For the two seniors, this was the perfect ending.

“For me and Maria (Blessum) to finish our high school careers as 4×400 champions is something that was our goal,” Stier said. “It’s just so awesome to actually do it.”

The first-place finish (4:06.09) by Stier, Blessum, junior Ellie Duchscherer and eight-grader Emily Mattern was also the perfect ending to a stellar overall outing at state by the Rugby girls and boys track teams. The girls took home first place (84.50 points) for the program’s first state title since 2011.

The boys had a number of strong individual performances during the two-day showing as well.

“I just have to give credit to all the (Rugby athletes),” Blessum said. “They’ve all performed really well. It’s a great day.”

The first to claim top honors for the Panthers was Brooke Blessum. In one of the few finals events on Friday, the sophomore rose above the competition at the long jump with a jump of 17 feet, 3.5 inches.

In a Top 10 that featured five upperclassmen, it was Brooke who stood at the front of the line in the awards ceremony and soaked in a round of applause from those at MDU Resources Community Bowl.

“It just felt amazing to receive (first) and have everyone cheer for me,” Brooke said. “It was a fun moment.”

Next to win first in their respective event was Maria, who blew away the competition in pole vault with a height of 11 feet — two feet better than her closest competitor.

The victory was even more sweet as Brooke, Maria’s younger cousin, joined her at the stage with a third-place finish.

“Winning state is what you dream of when you start track,” Maria said. “And it was awesome to have (Brooke) there. She’s my cousin, but she’s really like a sister to me. I’m so proud of her.”

Before the girls ended the day with a first-place finish in the 4×400-meter relay, there were also a number of strong finishes.