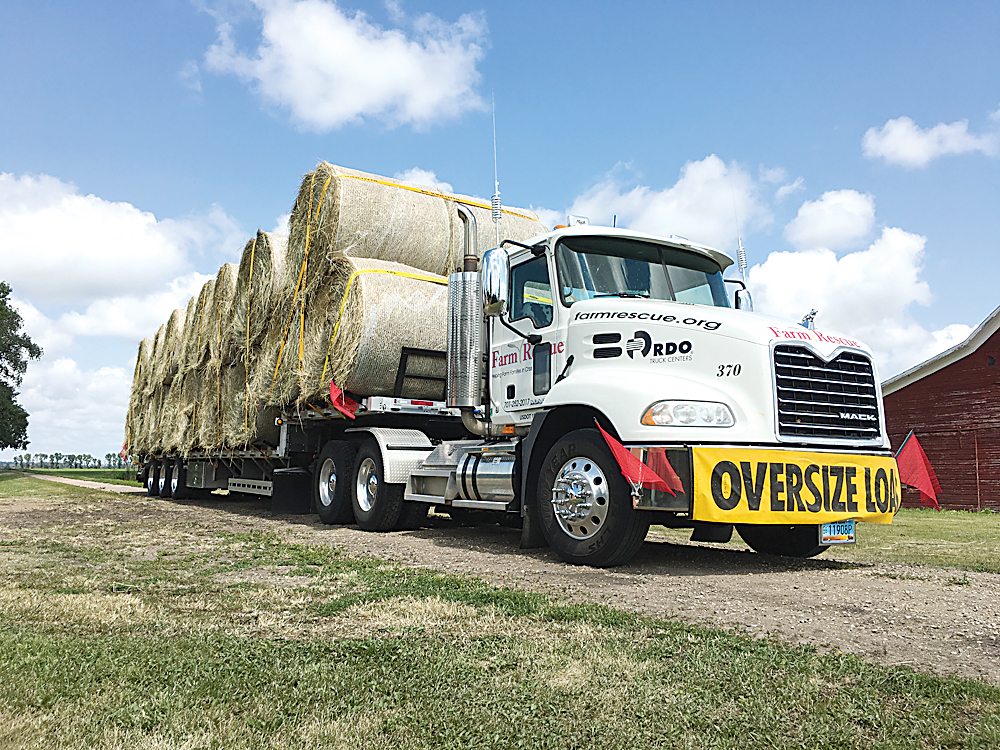 Submitted Photo Farm Rescue is assisting with hay shortage in the wake of the drought. The nonprofit organization has already transported loads of bales to several ranchers affected by drought but more donated or discounted hay is needed to accommodate the shortage.

HORACE – Farm Rescue, a nonprofit organization that provides planting, harvesting or haying assistance free of charge to farm and ranch families who have experienced a major illness, injury or natural disaster, is currently transporting hay free of charge to producers affected by severe drought.

Farm Rescue is accepting applications from ranchers who are seeking hay to fill the void left by unseasonably dry weather or fires in the Dakotas and Montana. The nonprofit organization is serving as an intermediary between ranchers in need and producers with additional hay available for transport.

Bill Gross, founder and president of Farm Rescue, said, in an interview Thursday, that they are looking forward to helping those in need of hay with free hauling of hay. “We hope people will step forward to donate more hay,” he said.

Gross said they have two or three trucks that will be hauling hay full time. He said this weekend Farm Rescue will be going to Wisconsin to pick up hay. He said donated hay from Grand Forks will be going to ranchers in the Hazen-Beulah area.

Free hay hauling is available through the remainder of the year as funding allows. (Certain restrictions apply regarding the distance and quality of bales to ensure safe transport.) Farm Rescue has already transported loads of bales to several ranchers affected by drought, but more donated or discounted hay is needed to accommodate the shortage. Anyone willing to provide such a gift to help a ranch family in need should call 701-252-2017 or visit farmrescue.org/donate.

“We are asking people to prayerfully consider making a special donation of hay or a monetary contribution so we can continue delivering feed for livestock of drought-stricken ranch families during this natural disaster.” Gross said. “Ranchers who need help in locating or transporting hay should contact our office as soon as possible.”

He said Farm Rescue is also still accepting applications from farmers or ranchers for harvest.

Farm Rescue has helped more than 425 families since its inception in 2006. The organization’s mission is to help farmers and ranchers who have experienced a major illness, injury, or natural disaster by providing the necessary equipment and manpower to plant, hay or harvest their crop. Farm Rescue helps farm and ranch families in North Dakota, South Dakota, Minnesota, Montana, Nebraska and Iowa. Applications are currently being accepted for haying, hay hauling, and harvesting. Applications are available by calling 701-252-2017 or visiting www.farmrescue.org.